The Morning After: Flyers win eighth straight at home

Share All sharing options for: The Morning After: Flyers win eighth straight at home

The Flyers won yet another home game Saturday night, this time a 4-1 decision over the Toronto Maple Leafs. 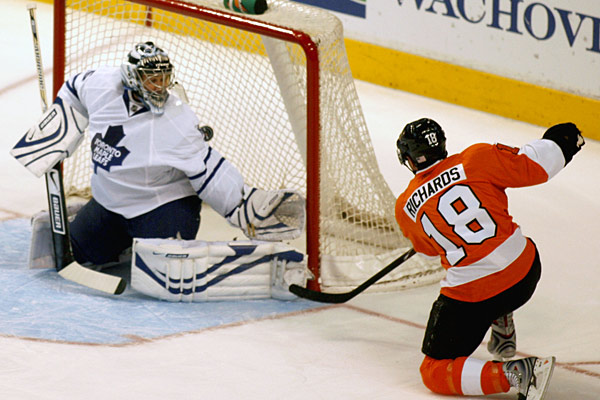 B&P Take: This team just loves playing at home. They're unbeaten in eight straight at home now, and it's clear they feed off of the Wachovia Center energy. The coach and the captain agree.

"We feed off the crowd's energy," said Richie. "It's more comfortable when you have 20,000 people cheering for you. It's intimidating for the other team that's coming in."

"I think our guys love playing at home," said the coach. "That wasn't our sharpest game tonight, but I thought the crowd was effective and they gave us the edge we needed."


The goalies were both fantastic. Vesa Toskala suffered his first ever loss against Philly, but he certainly played well enough to get the win. He made a number of big saves, and if it weren't for the porous Leafs' defense, he probably could have held off the Flyers attack longer. It was impressive that he was able to hold them at bay until the third though.

The Flyers defense on the other hand is slowly and quietly becoming another strong point for the team. Biron attributed much of his success Saturday night to their play. "Maybe they were getting the first shot through," Marty said, "but we weren't giving them the second or third opportunity and that was big. After I made the save, everything was cleared away and I wasn't pressured."

At the beginning of the year, it looked as if the guys on the blueline just weren't good enough, but they've been helped by strong play from the best players -- Kimmo Timonen and Braydon Coburn -- and better than expected play from youngster Luca Sbisa. Ossi Vaananen, while he didn't play Saturday, had had an impressive season so far with the Flyers, and the moves Paul Holmgren made to improve the D have certainly helped.

Andrew Alberts, one of those midseason acquisitions, contributed offensively tonight, something that doesn't come around too often. His goal was important, the Flyers third which gave them insurance in the third period. It was also Alberts first goal since 2006.

1. Brad May is in his second game as a Leaf and he’s already had a physical start to his Toronto career. How physical does this game get? Besides a fight in the first period between Riley Cote and Andre Deveraux, the game wasn't as physical as expected. That probably had a lot to do with how close it was for much of the contest.

2. The Flyers should win. It’s simple, do they do the job they’re supposed to? The Flyers certainly took care of business against a much weaker Leafs team. I was listening to the third period on XM and it was the Leaf announcers... they said something like "This is how the Leafs are going to lose a lot of games; by simply being outskilled by the other team." Seriously, he said that. That's like saying "the team with the most goals is going to win." Idiot. My point, though, is that the Flyers are the more skilled team and, like they should've, they controlled the hockey game.

3. Can Carter get on the board? Did he ever. He's been a little slow as of late, but he was flying tonight. He scored twice, including the empty netter, but he could've had one or two more if it weren't for Toskala's strong goaltending.

The struggling Penguins (has a nice ring to it, doesn't it?) visit the Center on Tuesday night. I'll be there, too. Will Michel Therrien?