Pigeon on ice in Chicago reminscent of '75 Cup Finals

Share All sharing options for: Pigeon on ice in Chicago reminscent of '75 Cup Finals 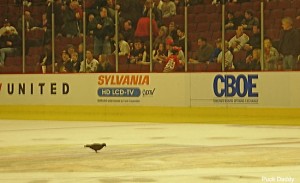 There was a post on Puck Daddy this morning about a pigeon that landed on the ice at United Center during Sunday night's Nashville/Chicago game. PD quoted another blogger, who had this to say about the incident.

I saw something tonight that I have never seen in my 20 plus years of shooting sports- a pigeon standing at center ice during the middle of a Chicago Blackhawks' game. I was hoping that the bird would get caught up in a play but no such luck. The pigeon was eventually chased off by a referee and never returned to the field of play. However, I assume at this point my flying friend is feasting on spilled popcorn.


PD also picked up this quote from Yahoo!'s baseball blogger, Kevin Kaduk, who was at the game.

A bird flew down to the ice a few times before the game and during the first period James Wisniewski tried to hit it with his stick. You might want to keep an eye out for any good pics or video of it. It was pretty funny.


Immediately, the first thing I thought of was the 1975 Cup Finals in Buffalo between the Flyers and Sabres. It was the game after the infamous fog game at the old Buffalo Auditorium. Let's go to Gene Hart in his book SCORE! (which I just completed, go buy it and read it and love it like your child) for the story.

There was no fog this time, but it looked like Halloween anyhow, as a live bat swooped and darted about the old Aud. Since it was May 27 and not October 31, the beat was permitted to swoop and dart only until the ever-accurate stick of Rick MacLeish picked it off in mid-air. Buffalo's Jim Lorentz gloved the poor creature and carried it from the arena, much to the relief of many in the audience.


Oh, yeah, the Flyers won their last Stanley Cup that night too.