The Morning After: Ugly.

Share All sharing options for: The Morning After: Ugly.

The Penguins waltzed into the Wachovia Center Tuesday night and took the Flyers eight game home winning streak, not to mention a bit of their pride, by winning 4-2. 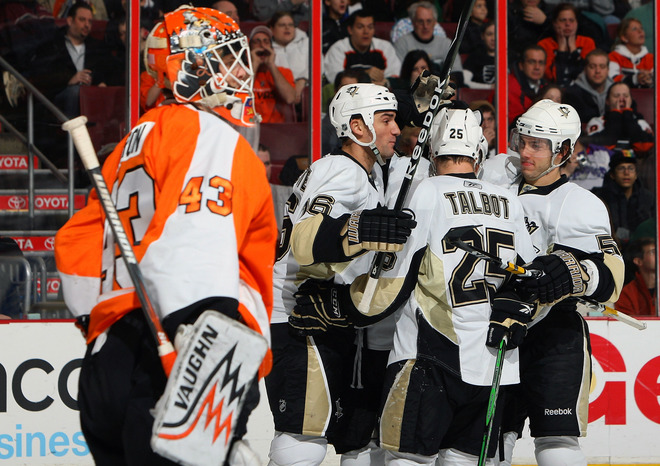 B&P's Take: The Flyers came out in the first period and didn't necesarily look good, but there were no indications that Pittsburgh was going to play well either, and it seemed like the Flyers had control of the game. A weak goal was given up by Fleury when he tried to play the puck behind the net. It wound up bouncing right in front to Mike Knuble who buried it. The bounces went the Flyers way early, and although every six seconds the Flyers were giving away the puck, Pittsburgh couldn't hold onto it themselves. It's hockey, not hot potato, guys.

A weak goal at the end of the first would set up the second period.

And the second would be a different story. Pittsburgh woke up and the Flyers did not. They outskated, outhustled, outshot, and outscored the Flyers. They won every aspect of the game and Marty Biron didn't help with some atrocious goaltending. Pittsburgh scored three goals and took a commanding 4-1 lead into the third period.

Penalties took the Flyers out of the game in the waning minutes of the third, and they were all legitimate penalties. Nothing to complain about except our team laying a fat old egg against our biggest rival (yeah, I said it, fuck the Rangers).

Speaking of the Rangers though, they won last night and regained first place in the Atlantic. Hell of a night.

Hopefully, the Flyers learn from this game though. They've been able to fall behind in games and triumphantly coming back in the third numerous times this season, and as I was waiting between intermissions last night, I had a feeling they could do the same. But they didn't, and maybe this is a game where they realize they aren't invincible.

The Penguins came in desperate, and they played desperate. The Flyers didn't match their intensity and lost the game because of it.

1. Does Jeff Carter keep up his torrid pace? Carter was probably the only Flyer who had a decent game. He was, as usual, swirling around everybody on the ice trying to make plays. Only an assist to show for it, though.

2. Pittsburgh needs to take the rabid Philly crowd out of the game quickly, because if the Flyers strike quick and early it could be a long night for the Pens. Do they silence the faithful early? They didn't, and the Flyers did strike early, but they couldn't build or capitalize on Pittsburgh's mistakes. The downfall began when Eric Godard rocked Riley Cote. Learn to fight again, please Riley.

3. Martin Biron is quietly playing excellent in net, and do I dare to say he looks like he did down the stretch and in the playoffs last night. Can he keep it up? No.

4. Do the Flyers keep Malkin and Crosby off the board? No. Crosby had two assists but he also missed from point black range at least three times. He doesn't seem himself, which is fine with me. Malkin looked just fine though.