Flyers give up lead but hold off Thrashers, 5-3

Share All sharing options for: Flyers give up lead but hold off Thrashers, 5-3

Atlanta stormed out of a 3-0 hole to tie the game at 3 in the third period, but Mike Knuble scored two goals in the final ten minutes to lift the Flyers to victory, 5-3, in their final game before the all-star break. 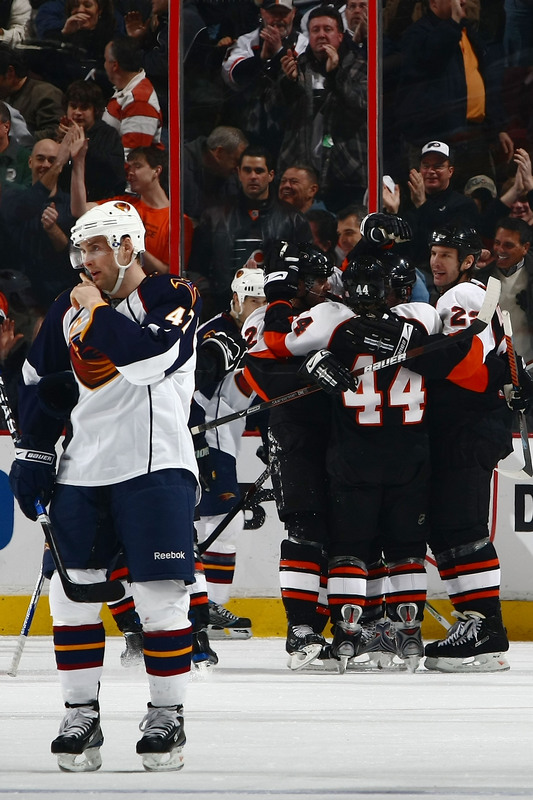 "Guys can take a break and relax and re-energize and not have to think about one that slipped away. All is good."
-- Mike Knuble

B&P's Take: The Flyers stormed out of the gate to take a 3-0 lead, with goals from Scott Hartnell, Darroll Powe, and Randy Jones. But in the second period they relaxed a little bit, and the Thrashers started to pick up their game. The Flyers wouldn't allow anything in that period, but the Atlanta came out blazing in the third period. A little under five minutes in, Eric Perrin trimmed the lead to 3-1. Five minutes later, the ever dangerous Ilya Kovalchuk netted his 20th, and then just a minute later Chris Thorburn tied the score. It was suddenly tied, the crowd was pissed, and the Flyers were shocked.

It seemed like this game was going to slip away, and what a horrible time for that to happen. A loss like the one we all expected when Atlanta tied the score would have been seriously deflating heading into the all-star break.

"I felt in that for the early part of the game we did the right things against a team that played the night before ... and I sensed in the second period we started to cheat a little bit. And [in the timeout] I just said that we've been controlling the hockey game, doing the little things well."

"To see a three goal lead evaporate like that heading into a break, well that was the last thing we wanted to see. I'm thankful that we stepped right up and scored a goal and that we're heading into the break on a winning note. There's no doubt in my mind that this break is going to be a lot easier to relax mentally for our players after winning that game because the most important part of our season lies in front of us." -- Coach Stevens

Offensively, the story tonight for the Flyers was not the two goal scorer, though. It was the line up Scottie Upshall, Darroll Powe, and Claude Giroux, who teamed up to score the Flyers second goal. And while on the scoresheet that line only had the one goal to show for themselves, they threatened each time they were on the ice. Upshall had a few breakaway attempts thrwarted at the last second, and he was buzzing around the ice like a honeybee every second he was out there.

Of course, this is the Flyers 13th straight win over Atlanta, and Antero Niittymaki's 12th win of his career against them. Niittymaki has also never been beaten by his countryman, goalie Kari Lehtonen, in professional play.

1. Does Antero Niittymaki continue his domination of Atlanta? Yes, he does. He is 12-0 with a 1.75 GAA in his lifetime against the Thrashers. He is the one of only two goalies to have an unblemished record with at least 10 games against one team -- the other is Chris Osgood who is 17-0 against Tampa Bay.

2. Can Atlanta keep up it’s surge, in particular Peverley? Atlanta definitely gave the Flyers a run for their money, and showed off their offensive might at the same time. Peverley was a big part of that, as was Kovalchuk, his linemate.

3. Does the five day layoff hurt the Flyers? The team came out flying in the first period, and completely dominated that first 20 minutes. I don't think the layoff hurt them one bit.

4. Can the Flyers convert on PP chances against the leagues worst PK? There were a ton of penalties in this game, and not surprisingly, most of them were against the Flyers. But they still got their share of PP chances and couldn't capitalize on any. Atlanta didn't score with the extra man either.

It's six days off for the Flyers until their next game. It'll be in South Florida against the Panthers after the all-star break. But for now, the orange and black end the first half on a winning note. Go Flyers.