UPDATED: Phantoms Garret Klotz has seizure after fight; looks like he'll be okay

Share All sharing options for: UPDATED: Phantoms Garret Klotz has seizure after fight; looks like he'll be okay 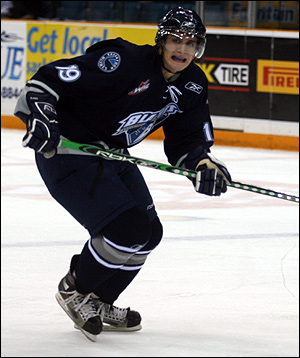 1:28 AM UPDATE: The National Post, with a hat tip to Kukla's Korner, reported what was originally reported here on B&P, with an added quote from Flyers GM Paul Holmgren. Holmgren serves in that same role for the Phantoms.

"It was a scary incident," said Philadelphia Flyers general manager Paul Holmgren to TSN Friday night. "But we just got word from our doctor that he’s clear — there’s no facial fracture. They’re stitching him up — his jaw is fine and there’s no tooth fracture or anything. It’s a scary ordeal, but he’s going to be fine."


The Phantoms website also updated his condition after the game.

Klotz was taken to the University of Pennsylvania Hospital after suffering a facial laceration and a seizure in a first-period fight. Klotz was alert and responsive en route to the hospital, and was able to watch the rest of the game on television upon arrival. He is being kept overnight for observation and is expected to be released tomorrow after further testing.


This was a scary incident for everybody involved, and I must say that as I left this evening to go play hockey myself, it was a little harder to strap on the pads. As soon as Klotz hit the ice, I said something akin to "damn, he doesn't lose fights that often." As the cameras zoomed in on his face, the reality that he was having a seizure set in. I said "oh my God," and my mom (who wanted me to flip back to Jeopardy because she was that frightened at the scene) said "I'm glad you don't play in college."

Thankfully, Klotz is going to be okay.

There should be a video on YouTube tomorrow, but trust me... you don't want to see it. I'll post the link regardless for full discloure purposes, but it really was an absolutely terrible scene.

This does certainly give us a different perspective on the ongoing fighting debate, though -- an example that hits close to home.

7:49 PM UPDATE: It was reported by the CSN broadcasters that Klotz did in fact suffer a seizure and a "facial laceration" but that he is in the hospital and responsive. I looked at another replay and it looked as if Klotz could have hit his head on the top of the boards as he fell to the ice. Westgarth connected with an uppercut to the chin, which was the blow that sent Klotz down.

7:09 PM Original Post: Breaking news... the Phantoms Garret Klotz was carted off the ice on a stretcher after a fight with Manchester's Kevin Westgarth immediately following the start of Friday nights' contest.

A Westgarth punch connected with Klotz's chin and he quickly fell to the ice in front of the Monarchs bench. The game is being televised on Comcast Sports Net, and as CSN's camera's zoomed in on Klotz as he lied on the ice, it appeared as if he was having a seizure, but that is purely speculation as I'm not a doctor and, of course, I'm not at the Spectrum.

The stretcher came out immediately and Klotz was taken off after about ten minutes. There is no word on his condition at the moment.

This incident is sure to add to the ongoing debate about fighting in hockey, and whether or not it should be eliminated from the game.