Share All sharing options for: Massachusetts high school goalie comes up with greatest pad design ever

As I put off posting about the all-star game some more (seriously, as I type this there's a woman hanging from the rafters playing a violin, you kiddin' me?), I found this article from boston.com. 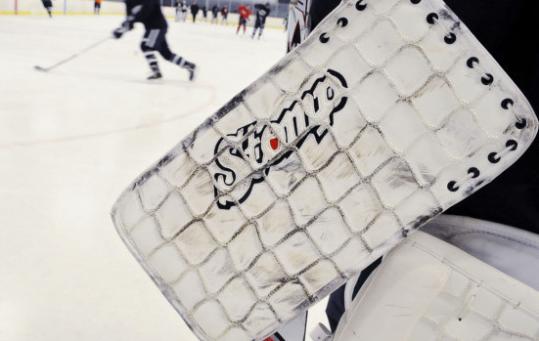 Using computer skills he learned in a graphic design class at the private school in South Hamilton, Leahy sketched out new leg pads that blend into the goal netting behind him. He wanted pads, a trapper, and a blocker that are white with a raised double-stitched design, just like the goal. He applied for a design patent and had them custom-made by a Canada-based pad maker.

"When the shooter comes down and only has a split second to shoot the puck, they're looking for net," said Leahy, a senior from Hampton, N.H., who grew up in Byfield. "If you put the net on the pad, they'll shoot at the pad instead of the goal."


Cool idea. It would never be allowed in the NHL I'm sure, and I'd be curious if it even works as intended, to confuse the shooter. But it's a sick design either way.