Sbisa's status is up in the air

Share All sharing options for: Sbisa's status is up in the air 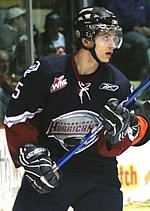 The Luca Sbisa situation right now is a little odd. No announcement has been made by the Flyers or Sbisa's junior club, the WHL's Lethbridge Hurricanes. But, there is certainly evidence that Sbisa has been in fact sent down.

For starters, we have the report from a French-language website based in Switerland, Planete Hockey. As reported here on B&P yesterday morning, the site said that Sbisa had been sent back to Lethbridge, but that the news was not yet official.

Then, we got a report from an English site, forecaster.ca, which despite its 1997 design, is usually a pretty reputable source for information. They also reported that "the Flyers have assigned rookie defenseman Luca Sbisa back to the WHL's Lethbridge Hurricanes."

He was not placed on the Hurricanes gameday roster on Friday night against Prince George as I initially reported yesterday. In my defense, he was on the official game report at first, but they must have realized their mistake and fixed it because he no longer is there.

And that makes it all the weirder that Saturday nights game report from Lethbridge's game against Red Deer has Sbisa listed on the roster, yet a number of people who attended or listened to the game last night (via the WHLFans.ca message board) contend that Sbisa did not lace up the skates for the 'Canes. The Flyers have still not announced anything, and neither have the Hurricanes or the WHL.

One final twist to the story: Kevin Kurz, the Flyers manager of communications and new media, or someone posing as him, wrote on the flyersphans.com message board that "This is a BS rumor." Nobody is questioning the integrity of the post over on that site, leading me to believe it's true, but as it is with any message board post... it could be anybody.

All the other evidence, besides this message board post by "KKurz", points to Sbisa heading back to Canada.

I guess we'll only know for sure, though, when he next takes the ice.