Flyers lose ground in division with loss to Panthers

Share All sharing options for: Flyers lose ground in division with loss to Panthers

The Panthers returned the favor and beat the Flyers by the same score as the first meeting between these clubs, 3-2. With the loss, the Flyers drop four points behind the Atlantic-leading Devils. 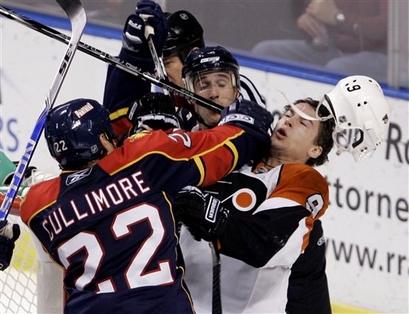 B&P's Take: The story tonight was penalties, specifically how badly the Flyers were hurt by them.

Simon Gagne high sticked to the face of Jay Bouwmeester. He was slightly cut in the cheek and blood was drawn, giving Florida a four-minute-long man-advantage. David Booth scored on the ensuing power play, which came at a critical time of the game midway through the second period -- a period the Flyers were stagnant in -- and it put the Flyers in a 3-1 hole.

That infraction came during a stretch where four straight penalties were called against the Flyers, and when you're spending that much time on the kill, it's hard to get anything going offensively.

John Stevens had this to say following the game.

"We've gotta play the game to the letter of the law. We've gotta move our feet, we've gotta not put our sticks in a position where the referee is in the position to call a penalty. But we've got to stay aggressive. I think if we manage the puck a little better and play in the offensive zone, that's not really a place where you take penalties."


The Flyers entered the third period at that same 3-1 score, but they came out firing. Darroll Powe sprung Claude Giroux with a beautiful 90-foot long pass, and the rookie put a shot over the glove hand side of Tomas Vokoun to bring the game within a goal. It was Giroux's first NHL goal, and I'm sure the first of many we'll be celebrating over the next few years. Five minutes later, Vokoun was caught out of his net and Mike Richards threw it into the empty cage to tie the score..... or did he?

Arm up. Penalty. Kimmo Timonen, interference on the play for bumping into Keith Ballard in front of the net. It seemed innocent enough, and the players certainly weren't happy with it.

"I was big time surprised. I saw it on the big screen up top. It's a little suspect when -- and no offense to Kimmo, but when he's pushing guys around in front and they're falling like that, well maybe the guy should hit the gym a little bit more. A little bit disappointed, obviously, we could've tied the game, it was a big goal. But you've gotta understand we're the Flyers and we're gonna get those calls called against us sometimes." -- Mike Richards

"Too many penalties, you know. And we're the Flyers, we're gonna get penalties, that's for sure, and sometimes they're not good ones, sometimes they're bad ones, and we gotta live with that. I didn't hit him that hard, he was already in a bad position, he fell down." -- Kimmo Timonen


The players clearly feel like they are being cheated in some regard. John Stevens didn't comment on that aspect of it, instead deciding to focus on what the team needs to do to help themselves.

"You don't want you're team being tentative, but we've got the worst plus/minus differential in the league in terms of power plays and it's taxing on your key people. We've had several [road] games where we've had one or two power plays the entire game, and you can't expect to tax your key people the entire game and have that much energy and the end of the game. We're going to have to look at what's being called and do our part from having that many penalties called. You can't continue to take them at that rate."

Certainly, there is something to what the coach is saying. The PK unit guys get tired when they are constantly fighting off these kills, and it hurts the team in the long run. Whether or not the Flyers are getting an unfair shake, they need to do the little things to help put them out of harms way. Like Stevens said, moving your feet and being careful with your stick and playing in the offensive end. Obviously, the Timonen call was made in the offensive end, but as I said, the Flyers played stagnant and on their heels in the second period, and playing that way is a good way for the opposition to draw penalties.

The Flyers have got to do a better job of not taking their feet off the gas pedal (even for five minutes), because doing that is lazy hockey, which leads to killing more penalties, which leads to a lack of energy when you need to come back late in the game, as happened tonight.

1. Third game in 11 days. How do the Flyers respond to so much time off? I thought the Flyers responded well to the lay off. Bill Clement said during the broadcast that Mike Knuble had an extremely strenuous warmup on the ice prior to the game, and he guessed that he was trying to simulate the first period a bit -- trying to get the cobwebs out from the break. It seemed to help Knuble out a lot. There was a let down in the second period, but I don't think that can be attributed to the all-star break.

2. Is Luca Sbisa a Philadelphia Flyer? Yes, he is. He was a scratch tonight... for the fifth straight game. As I said in the comments on the game preview, I’m kinda wishfully thinking that Holmgren is looking for a trade to get rid of Jones, and that’s why he’s keeping Sbisa around. But that's only wishful thinking. It's ludacris that he's just sitting around at this level when he could be playing full time in Lethbridge. He doesn't help the team or himself by just sitting around at this stage of his career.

3. Marty hasn’t played since the Tampa Bay game back on the 15th. How sharp is he? Marty was so-so tonight, as was in his last two outings before tonight against Tampa and Pittsburgh. He looked completely fooled on the first goal by McCabe -- almost like he didn't expect McCabe to take a shot. The second goal by Frolik was just an unlucky bounce in front, and the third was a deflection. He could've played better, but he could've played worse.

4. The Panthers are in a heated race for the playoffs. A win can potentially push them into that eighth seed. Do they come out blazing? I thought the Panthers played really well tonight. They looked like a playoff team, and it's nice to see some talent in Florida for a change. That franchise needs some success, and I hope they make the playoffs. If they keep playing strong hockey like they have been, I think they will indeed make it.

Playoff Chase: The Flyers fell off the pace in the Atlantic Division race tonight, as both the Devils and Rangers both won. New York defeated Carolina 3-2 and Jersey beat Ottawa 4-1. Montreal lost to Tampa, though, 5-3.

Gamenight Roundup: The Oilers lost 10-2, at home, to the Sabres; it's the second blowout loss at home for Edmonton this season after losing to Chicago by a 9-2 score in December; they dropped from sixth to eighth in the West standings ... Red Wings lose to Columbus without Datsyuk and Lidstrom, who were suspended for not showing at the ASG; Detroit fans' heads' explode ... Alex Ovechkin was injured in Washington's 3-2 overtime loss to Boston after he wiped out head first into the boards; he returned for the start of the third period, and unlike the YouTube idiot that posted that video, it wasn't a dirty play on Chara ... And finally, I spent a lot of the game tonight over in the game thread at Litter Box Cats, a Panthers blog; while I'm not big on the name of the site, they were awesome over there the entire time -- a real pleasure to enjoy the game with; go check them out for the Florida perspective -- they know their stuff ...

The Flyers are off until Friday when they travel across the Sunshine State to Super Bowl crazy Tampa Bay. 7:30 start. Go Flyers.