Share All sharing options for: That's what we needed: Flyers trounce Tampa 6-1

That's what I'm talkin' about, Flyers. The guys waltzed into Tampa and rolled over the Lightning, 6-1. Mike Richards had three points including two goals, and Jeff Carter added two goals himself. Antero Niittymaki made 41 saves to shutdown the Tampa attack. 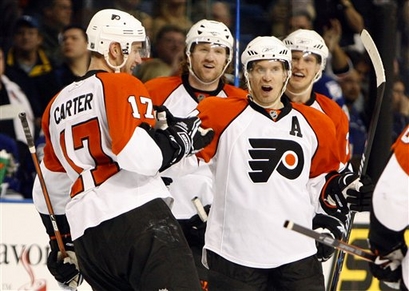 B&P's Take: It was a bit of a strange game, with two overturned goals and a penalty shot, but everything went the Flyers way tonight. Mark Recchi DID score on his goal that was reversed (they said he kicked it, he didn't), but the Steven Stamkos goal that was overturned was tough to argue either way against. The War Room in Toronto has more angles than we do watching on TV though, so these situations are tough to complain about. Why would we, though? They both went in our favor.

And perhaps that helped the Flyers jump out of their cage. It was 1-1 when Rex's goal was taken away, and it came toward the end of the first period. Philly came out in the second period storming, and Randy Jones scored on the PP to make it 2-1. A few minutes later, Richards scored his second of the night and the Flyers were breaking the game open.

Tampa had a few more chances to get back in it though. They peppered Antero Niittymaki with shots, but the Great Wall of Finland held strong, just as he has in his entire career against the Southeast Division. He's 19-1-1 against SE teams -- unreal. Kimmo Timonen hooked Martin St. Louis on a breakaway about five minutes into the third period and the referees awarded St. Louis a penalty shot. Nitty might've gotten a piece of it as it sailed up and over the crossbar. About two minutes later, Stamkos batted in his disallowed goal with a high-stick.

From there on, the Flyers closed the small door Tampa still had open. Carter scored two down the stretch (he passed Ovechkin for the league lead with 32 in the process) and Scott Hartnell added one to help the orange and black to a 6-1 win. It was just what they needed -- a strong win against a team they should beat.

Offensively, the Flyers destroyed Tampa. The Lightning defense was pretty much non-existent and Mike Smith had literally no help back in the cage, and the Flyers took advantage.

The only down side for tonight were the penalties, but it's a serious problem. Thankfully, Tampa isn't exactly a potent offense, but the Flyers gave them nine powerplays by taking 12 minor penalties. It's ridiculous and it has to stop.

How overrated was Stamkos in that draft last year, anyway? Man... not impressed.

Also, I don't miss Steve Downie. At all.

Behind Enemy Lines: Cassie at Bolts Blog has the Tampa perspective on the game.

You certainly can't accuse Tampa Bay's top line of slacking. Not when those three guys had half the shots for the team. St. Louis had nine shots, Lecavalier eight, and Prospal four. I thought that Prospal had a pretty good game, actually. And St. Louis got a penalty shot attempt, too. Like I'd said, tho, it was one of those games, so they weren't able to put anything in the net.

But let's give Niittymaki some credit. I've always thought that he was one of the more underrated goaltenders in the league. And he definitely shined in this game.

The Lightning's defense weren't helping Smith all that much. And the forwards weren't helping the defense. The only thing that looked good were their special teams. Which was good, I guess, since they were either on a power play or killing a penalty for a good part of the game.

1. Can the Flyers stop taking so many damn penalties? No. It's bad. Against teams like Boston and Washington and New Jersey, they aren't getting away with this crap. They've got to find a solution and quickly: the Bruins loom on Wednesday.

2. Do the Flyers realize the urgency of this game? It seems that way. Regardless, they got the job done.

3. They should be Tampa. Do they play like they are the better team? They certainly did.

4. The Flyers have always struggled playing in the St. Pete Forum. Is it psychological? It was practically a home game for the Flyers tonight in Tampa... if you watched the game it looked like a whole section to the left of the benches there was an entire section of orange. Clearly, the demons the Flyers usually stuggle with in that building weren't there tonight.

Playoff race update, after the jump...

With the win the Flyers moved one point ahead of idle Montreal for the fifth spot.

(9) Pittsburgh at (2) New Jersey: The Penguins held a 3-1 lead in the third. It looked as if they were going to step into "The Rock" and end the Devils seven-game winning streak. Let's let Frank from Pensburgh tell the rest.

Petr Sykora, Devil from 1995-2002, took a double minor for hooking and unsportsmanlike conduct in the third with nearly eight minutes remaining. Up 3-1, the Pens' PK unit hit the ice in hopes of killing it off.

Enter Brendan Shanahan, former Devil from 87-91 and once again as of less than a month ago. In a matter of four seconds the Devils won the faceoff and a Shanny shot flew past Fleury.

That was the turning point right there, the catalyst to a Devils win and a Penguins loss. And the score was still 3-2 Pens. But you just knew. You knew something like this was going to happen.
It happened all right. Langenbrunner scored with 31 seconds in the third to tie the game, and Jersey had all the mojo they needed. With a minute left in OT, it was like deja vu. Langenbrunner scored again this time a shot that sailed over the shoulder of Marc-Andre Fleury, and the Devils won 4-3. It was Langenbrunner's second two goal game in two days and his second OT game-winner in just as many nights.

Pitt can't even win when we want them to. Thanks, assholes.

The good news is that the Flyers kept pace with the Devils, but they still sit six points out with two games in hand. But, Pittsburgh is still out of the playoff picture -- never a bad thing -- and we move within one point of the idle Rangers with two in hand over them, also. Sitting pretty, for the time being. Another win tomorrow night is important though heading into the home-and-home with Boston.

Gamenight Roundup: Former secretary of state Condoleeza Rice was in Tampa for the game tonight ... Staying semi-political, Chief Justice John Roberts (the guy who screwed up Obama's Oath of Office) took in the Capitals outdoor practice on Thursday night, (a really, really cool idea by the way *ahem Flyers*) ... Columbus beat Ottawa 1-0 ... Ottawa sucks ... Our next opponent is "pissy" ...