Getting to Know the Penguins - Five Questions with Pensburgh

Share All sharing options for: Getting to Know the Penguins - Five Questions with Pensburgh

While the Keystone State's two NHL franchises don't always get along so well, the Flyers and Penguins communities here at SB Nation are a model of cordiality and cooperation.

With that spirit of brotherly love in mind, FrankD of Pensburgh and I asked each other five questions each to get a look into how things are going on the other side of Pennsylvania. You can (and should) read all ten questions and answers after the jump.

1. True or false: The Flyers were the toughest opponent the Penguins faced in the East on their way to the Cup.

"Toughest" is open to interpretation. If by toughest you mean references to fistacuffs, hits, scrums, etc. then yes, the Flyers were the toughest team the Penguins played. However if by toughest you mean hardest to play against, I'd have to give the nod to Washington. Although Pens fans generally despise both fan bases, I think Washington put up the biggest fight to bring the series to seven games.
2. How would the end of last season have been different if Michel Therrien had stayed at the helm? Would the turn around have been possible without the coaching change? Or was the bigger difference the addition of Guerin and Kunitz?
I really don't think the Pens would've won the Cup if Therrien was still around. Shero might have made moves for Guerin and Kunitz regardless, but who's to say Guerin wouldn't have considered another team with a better chance of winning it all? With Therrien the Pens could've maybe, maybe squeaked into the playoffs at the eight seed. But really the coaching change was necessary. At that point in the season, far out of the race and looking for a spark, it's hard to rally the team around a coach who many claim "lost the locker room." Bring Dan Bylsma on board and giving the team a fresh place to lift off from really worked wonders. That much was evident after the first round when Pittsburgh extended a contract to Bylsma, more or less expressing their interest in keeping him on board regardless of the overall outcome. Of course the overall outcome only made that decision look all the more prophetic.
3. Do you think there will ever come a point where the Penguins won't have the cap room to keep both Malkin and Crosby?
I don't think finding room for those guys will ever be a problem. As long as there isn't some sort of blow up or reason for the guy looking to test the market, I really can't see how or why they'd choose to leave Pittsburgh. I mean, in the past a guy like Jaromir Jagr WANTED to test free agency, so anything is possible. But given the current situation, the chemistry with the team and the overall success I can't see any reason right now. Besides, the Penguins will likely give them any asking price.
4. As a percentage, what are the odds the Penguins win the Atlantic division this year? They've only done it once since realignment.
I'm not concerned about seeing the Pens win the division. They didn't win it last year and still won the Conference and Cup. I say bring on low expectations from pundits and so-called experts. Pittsburgh defied the odds once already and plays better in those kinds of situations.
5. The Penguins have not been a particularly popular pick to repeat even as champions of the East, with the Flyers, Caps, and Bruins all getting picked more by the so-called experts. Why do you think that is, and do you think the Penguins should be considered the favorites to make it back to the finals?
Everyone will reference the "hangover" and such that is supposed to make this season seem like the Pens are skating through sludge. But you know what? That was the same reasoning behind Pittsburgh's not-so-hot start last season. A lot of commentary even around the all-star break continued to focus on Pittsburgh trying to recover from the hangover. Then what? They turned everything around, although not without a dramatic coaching change and a move at the deadline.

The odds are stacked against them. Like I said in the previous question, that doesn't even seem to be a consideration for the team or fans. And hey, the East is strong. Not much has changed in the conference with regards to these four teams that would make you think either will suffer or do worse this year than last. Pittsburgh is relatively unchanged, Philly added a punch, Washington will now potentially start with the goaltender who carried them through the playoffs and Boston, minus Kessel, can still match with the others. It's going to be an interesting year.
PensBurgh's Questions for Broad Street Hockey: 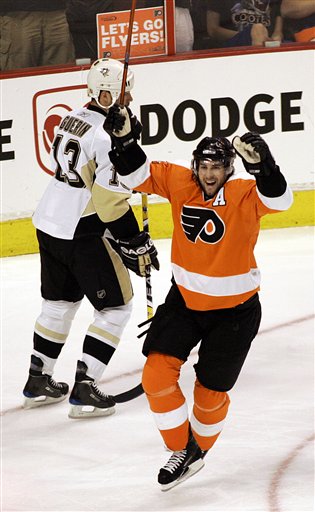 1. Lets get right to it. Ray Emery and Chris Pronger - the answer?

They're certainly an answer. Emery is a goalie with a great playoff track record, which is what the Flyers needed. Pronger is obviously a beast--a shutdown d-man, which is something every team can use more of. His vocal veteran leadership will be a huge help to this team, as will his offensive presence. For how scoring the offense was, the Flyers D had been seriously offensively-challenged. The double-digit goals Pronger should bring to the table will certainly be appreciated.

2. Last season Philly posted six different 25-or-more goal scorers - Jeff Carter (46), Simon Gagne (34), Mike Richards and Scott Hartnell (30), Mike Knuble (27) and Joffrey Lupul (25) - no doubt an impressive showing. With Knuble and Lupul signing elsewhere in the offseason, do you think Philly has two guys who can step it up and replace them or will this be an area where the Flyers might struggle?


Philly absolutely has two guys who can replace Lupul and Knuble in Daniel Briere and Claude Giroux, two guys who both saw limited ice last year. I'm pretty sure Briere and Giroux will combine for more than Knuble and Lupul's 52. Mika Pyorala has also been incredible in the preseason, so he might well break 20 as well. This is a case of the rich staying rich.

3. In your honest opinion, are the Flyers a better team on paper this season than last?


I'd say yes, but not by a whole lot. Losing Mike Knuble sucked, because he was a gritty veteran guy who got a lot of huge garbage goals. Losing him to Washington sucks even more, because he's exactly what they needed offensively down there. But Pronger, a healthy Briere, and a clear starter in Emery make this a better team this year than last. And they were pretty damn good last year.


4. Why is it that whenever the Flyers make a move (Pronger specifically here) it's seen as a deterrent to Pittsburgh? It's not like you guys play the Pens 82 games a year.


Every team uses some other team as a measuring stick. Some use the Stanley Cup Champ, some use their biggest rival, and some use the team who knocked them out of the playoffs the year before. The Penguins are all three of those for the Flyers, so it's no wonder that's who the Flyers are always compared to. Makes a lot more sense than saying "those Islanders better watch out for Pronger."

5. I guess on that similar note, for two-straight seasons Pittsburgh bounced Philly from the playoffs (as if you needed a reminder). Some would argue Pronger was brought in as a guy who can prevent that from happening again. Discuss.


Pronger will make the Flyers better against everybody, which includes the Penguins, for sure. The Flyers were a blown three-goal lead from forcing a Game 7 against Pittsburgh last year, so I don't necessarily think they needed a big move to be able to beat them this year. Pronger should be effective in shutting down Crosby and Malkin, sure, but also Ovechkin, Gaborik, Tavares, Kovalchuk, or whoever else comes his way. 76 of the Flyers games this year will be against teams that aren't Pittsburgh, so I don't think that move (or any move) was made with one opponent in mind.