Not since the days of Ron Hextall have Flyers fans felt confident in their netminder for more than a few months.  Martin Biron had a great playoff run in the spring of '08, Robert Esche seemed capable enough in '04, Roman Cechmanek was calming for a few games (and able for a little while), and everyone remembers Brian Boucher in 2000.  But it's been a long time since the team has found one guy who can patrol the Flyers crease for more than a passing phase.  Maybe that's Ray Emery, maybe it's Johan Backlund, Nic Riopel, Adam Morrison, or maybe it's Jacob De Serres.

Since De Serres was drafted, the Flyers have picked three more goalies - Joacim Eriksson (2008, 7th round), Adam Morrison (2009, 3rd round), and Nicola Riopel (2009, 5th round) - in an attempt to find a starting NHL goalie from within.

Yesterday, Broad Street Hockey got an exclusive interview (seriously, I just wanted to say that and feel special) with Flyers goaltending prospect Jacob De Serres.  Much appreciation is due to Derek Zona of The Copper & Blue for putting us in touch with Matt McNish of the Brandon Wheat Kings, and allowing us to interview De Serres.  Thank you.

Broad Street Hockey: [Wednesday] night, you got the win for Brandon in a 7-3 game, and one of Prince George's goals came on the power play.  Were you happy with your performance?

Jacob De Serres: Fairly happy.  I think I'd like to have the first two back.  Well, the first one I'd like to have back since it was a bad rebound on a 2-on-1 and the guy had an empty net.  The second was a fairly bad bounce.  If I was a little more patient, I could have had it.  After that, I battled the rest of the game and did really well.  The third goal, it was a big save and they got the rebound in.

BSH: Has controlling the rebounds been a problem for you?

De Serres: Not a regular thing.  It's not recurring in every game at least, it just seemed like it last night.

BSH: I noticed you didn't get off to a great start this year.  Was any of that lingering from last year's groin injury?

De Serres: It could have been.  Definitely, and I'm not going to blame anything, but I think the fact that I was out of the net for so long, the last time I played a game was the very beginning of February.  So I think it was just a comfort level, needing to get used to game mode.

BSH: Here in Philly, we're used to going injuries, from Gagne to Briere, and even to Niittymaki last year.  Did you feel any lingering effects this year, or is it 100%?

BSH: On that note as well, last year was statistically your worst one in the WHL and included the season-ending injury even after you lost your starting job.  How has that experience helped you out and how have you rebounded mentally?

De Serres: First, I don't think I lost my starting job.  I think, I don't know why people say that.  It may have looked like that because by the end of the year, [Calvin Pickard] had way more minutes.  But I was also out for the last two months of the season.  I think from Christmas until I got hurt I was playing awesome.  I was feeling good again, so it was just terrible timing for my injury to happen.  It wasn't the best year, but I think I've learned a lot from it and in the end, it will make me better.  [Ed. note: From December 27th to February 7th, DeSerres compiled a 7-8-0 record, witha  2.89 GAA and a .902 S%]

BSH: Entering this year, you had three games back in Seattle and then you got traded to Brandon.  Since then, things have started to turn around - your stats are obviously much better in Brandon than they were in Seattle for the first three games.  I know it's a small sample size, but what do you attribute the turn-around to?

De Serres: It was a much needed change.  In my head I really needed to get out of there.  It just wasn't the right place for me any more.  I needed a change, a change of scenery, and I think it was mostly all in my head.  I needed a fresh start and Brandon's a lot better.  Good guys, a lot of positive players, and a good atmosphere to be around.  I'm happy with it here and couldn't have asked for more. 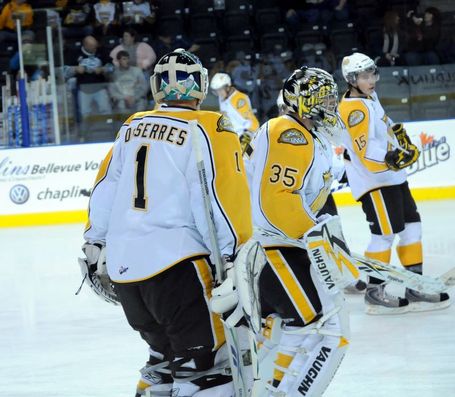 BSH: Along that subject, Andrew Hayes - the other goaltender with you out in Brandon - has been playing well in net so far this year.  Do you look at that as a competition, do you look at his as someone you can learn from, and do you think you'll be able to take starts away from him or just split time evenly?  How are you trying to approach that this year?

De Serres: I think all of it.  I think I can learn from him like I can from any goalie.  I believe in myself, I think I'm a very talented player.  When I get going, I think I can get really going.  Just going to play the best I can, and I think [General Manager and Head Coach Kelly McCrimmon], later on in the year, will just play who's playing best.  I just have to make sure I'm that guy.

BSH: Talk about your experience in training camp this year in Philadelphia.  What was it like - I'm assuming this was your first camp where you got to participate rather than just being the new draft choice - so either correct me if I'm wrong, or explain what that experience was like.

De Serres: It was actually my second camp.  The year after I got drafted it was a pretty good experience.  The rookies stayed around longer.  The first year I stayed out quite awhile, and I even missed the start of the season in Seattle.  Every experience has been great.  I guess the second time around, I knew more what to expect - I knew a bunch of the guys.  Less nerve-racking too.  Both experiences were great and different in their own way.

BSH: I actually got a chance to watch you during the rookie game against Washington this year in training camp, and you only gave up one goal on fifteen shots.  I remember that goal was pretty much a 4-on-none after a bad line change.  I thought you played well in that game, but what did you take out of that game specifically?

De Serres: I thought I played great too.  I thought I battled hard and made some big saves and felt comfortable too.  I always have thrived on playing at a higher level.  I felt god out there and hope that next year, I'll be at that level.

BSH: Speaking of next year, where do you expect to be playing?

DeSerres: Personally, I plan on playing for the Phantoms next year.

BSH: What aspect of your game are you trying to work the most on, that you think needs the most improvement so far?

De Serres: It's tough to pick out one specific thing.  You're constantly working on something.  You see a few things in a couple of games and you work hard at it at practice, fix it a bit, and then there's always something new coming back.  You know, there's never really been one specific thing that I just can't fix. 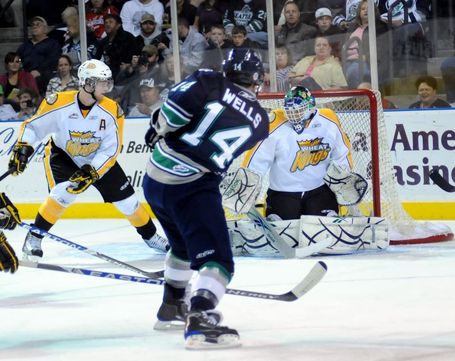 BSH: With the Flyers organization, you were drafted in the third round.  At the time, it was the highest the team had selected a goalie since 1999.  Since then, they have drafted three more.  What makes you stand out among the many goalie prospects within the organization?

De Serres: I don't think I need to look at all the other guys.  I just have to focus on myself, play really well, and it will all take care of itself.  If I'm playing well and stopping all the pucks, then that's all that really matters.

BSH: Lastly, in doing the research about you, I came across an interview in which you listed your favorite television series as One Tree Hill.  Is that accurate, was it a joke, or is it a guilty pleasure?

De Serres: (Laughs) I really do like that show.  I think it's kind of a thing in Junior hockey, because I think, in Seattle and also in Brandon, half the guys love that show too.  Surprisingly, you'd be amazed how many guys love that.  Not everyone may be able to admit it though."

Thanks again to Derek, Matt, and Jacob for allowing this to happen.

Here's the .mp3 if you want to listen.  Just forgive my awkwardness at the end.