High Tide in the Atlantic

Share All sharing options for: High Tide in the Atlantic 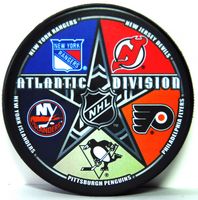 For the last several days, all five Atlantic Division teams--the Penguins, Rangers, Devils, Flyers, and Islanders--have been in the top seven of the standings in the Eastern conference, their supremacy interrupted only by the respective division leaders of the Southeast and Northeast Divisions.

It's probably not reasonable to expect all five Atlantic teams to make it into the playoffs this year. Based on their starts, Ottawa, Buffalo, and Boston should all have a pretty good chance of making it into the playoffs out of the Northeast, as will Carolina from the Southeast if they can turn things around. And though they are currently in the #7 slot, the Islanders have still only won five of their first fifteen games.

But even if five Atlantic teams in to the playoffs, there's a pretty good chance there will be four. Since divisional realignment began in the 1998-1999 season, the Atlantic Division has never sent fewer than three teams to the playoffs, a mark to which no other division comes close.

There have been four Atlantic Division representatives in the playoffs each of the last three years. No division had ever sent four teams to the playoffs on three separate occasions, much less in a consecutive, back-to-back-to-back fashion as the Atlantic did in 2007, 2008, and 2009. 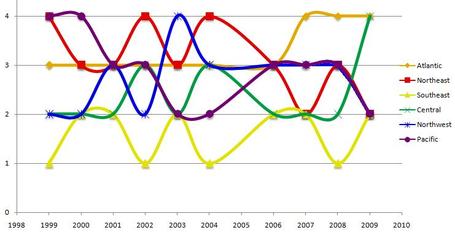 Here are some more things you may not know about the illustrious Atlantic: