Since we're closing out 2009 and thus the decade - we like easy, round decades - we decided to jump on the bandwagon of decade posts.  So here is our Flyers All-Decade team.

We mentioned this topic during our first radio show, and we finally got around to doing it.  It took awhile and there were a few disagreements, but it wasn't hard naming most of them.  Where they fell was the only real disagreement.

As you'll see, we actually came to a bit of a consensus - even if it took a little jostling.

In case you haven't guessed, Simon Gagne was the runaway favorite for the left wing spot - and for Flyer of the decade.  Since the 1999-2000 season (the first in our decade), Gagne has played in 620 of the Flyers 820 games - 76%.  His 492 career points ranks him 13th on the Flyers all time list, and his 244 career goals rank him 9th all time.  Since he's the only Flyer who stayed continuously since 1999-2000 season, he certainly had a leg up on his competition.

Travis' take:  The only player to play the entire decade with the Flyers. Gagne has played his entire career in Philadelphia, and while the latter part of the decade has been highlighted by injuries for him, Gagne has still scored almost 300 goals as a Flyer, all during the 2000's. Not to mention he kept the 2004 season alive in Game 6 of the ECF with that awesome OT goal.

Ben's take:  The first of two no-brainers for me.  Gagne was here for the entire decade, and was consistently explosive throughout.  Big goals, big speed, big concussion issues.  What more could you want out of a Flyer?

Primeau's career was cut short due to injury, but it's hard to forget his impact on this team.  Joining the Flyers in the middle of the 99-00 season after a holdout in Carolina, Primeau's arrival was a bit controversial.  Coming over in a trade that sent fan-favorite Rod Brind'Amour to Carolina wasn't the easiest way to welcome him to his new team, but his 17 points in 23 games - adding 13 points in 18 playoff games that year - helped smooth things over.  Of course, his epic 5-overtime game winner didn't hurt either. 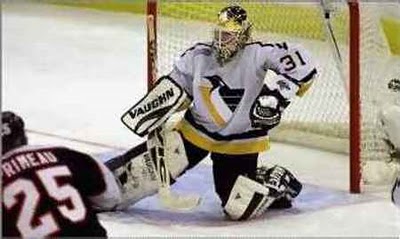 Ben's take:  The best Flyers captain of the decade, the most clutch playoff player the team had since like Reggie Leach.  I was so enamored with his play in the 2004 playoffs that I actually deluded myself into thinking that he had a shot at the Conn Smythe despite not making the finals.

Travis' flip-flop:  Mike Richards, 12-year contract, the future of the Flyers, the next Bob Clarke. Richards has been touted as the man that will carry this franchise to a Cup, hopefully sooner rather than later, much like Lindros was in the 90s. It hasn't happened yet of course, but Mike Richards is clearly the face of the franchise. (Could've just as easily made this Primeau, though.)  [Eds. note:  If you remember, Travis picked Primeau on the radio show, saying "he was an absolute monster in [the 2004] playoffs and he proved that he was a true captain in those playoffs.  If it weren't for a few injuries they suffered on the blueline in that playoffs, I think the Flyers would have brought home a Cup, and Keith Primeau had a lot to do with it.  Because of that, I would name him as my center on an all-decade team."]

Always a fan favorite, the 5'10", 185 pound Finn never shied away from anybody.  Everybody remembers when he got crushed by Darcy Tucker, but how many remember him playing defense in the 2004 playoffs?  There isn't much to say about Kapanen since he did everything on the ice, and he did it well.  He wasn't usually flashy and there aren't many defining moments, but it never mattered with Kapanen.  He earned the respect of Philadelphia because he always played hard, always did his job, and was willing to do whatever it took to win.  Maybe an underdog choice, but he's who we went with.

Travis' take: I think it was Ben who brought Sami up on the radio and the more I think about it, the more I like the pick. He was a consistently strong player for five seasons, he was a class act all around, and as a member of the 2004 team, by far my favorite team of this decade, I have a stronger connection to him than I do with most others. I'm not sure if it's the monstrous hit he received from Darcy Tucker or if it's because I always rooted for him and was heartbroken when he retired, but Sami's always been one of my favorite Flyers.

Ben's take:  If we were just picking two wings, Kapanen wouldn't have gotten the nod from me.  But the right wing selection is pretty weak, so I'm happy to be able to give my boy Sami this high honor.  Sami was around for a long time, and played well 'til the end.  Here's hoping we get to see him in Vancouver.

For someone who broke into the league in 1988, it's hard to see Desjardins as one of the best Flyers during the 2000's.  But he did play in 6 seasons this decade, finally retiring after the 05-06 season.  A 7-time winner of the Barry Ashbee Trophy as the Flyers best defenseman, Desjardins only won the honor twice this decade, but he should go down as one of the best Flyers defenseman of all-time.

Ben's take:  Along with Gagne, the other no-brainer.  Strong on both sides of the puck, and captain during a very tumultuous time for the organization.

Travis' take: He may have dropped off some in the tail end of his career, but Desjardins was obviously one of the best defenseman the Flyers have ever had. He was a consistent force for on the Flyer blueline for parts of 11 seasons, six of them in this decade. Seven Ashbee trophies kind of speak for themselves, anyway. 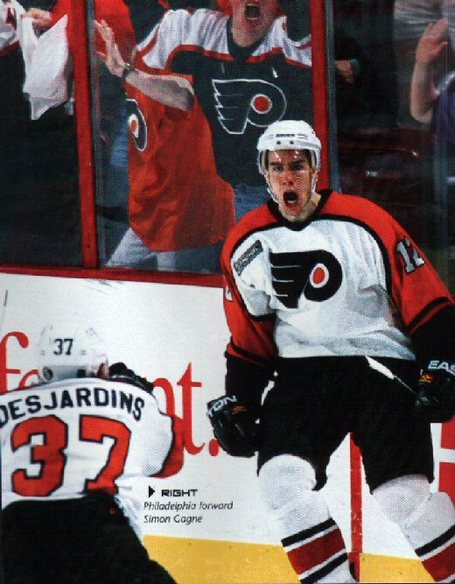 (That's always been a favorite of mine.)

He may only be in his third season with the team, but there's no denying the impact Timonen has had on the blueline.  A calm and steady defenseman is something the Flyers have for a long time - so maybe there's a bias here - and Timonen fits that bill perfectly.  He's only missed 5 games for the Flyers, and while he's had a rough start to the season, he's still a plus-20 in his Flyers career.  Much like his fellow Finn Sami Kapanen (the two own a controlling majority of a Finnish SM-liga team, with Kapanen owning over 50%), Timonen isn't flashy or often noticed.  Quietly going about his business, Timonen is largely underrated - even in Philadelphia - which is truly a shame.

Travis' take:  Yes, he's only been here for three seasons, but in those years, Timonen has established himself as one of the most important defenseman the Flyers have ever had. If you took Timonen out of the lineup, quite frankly, the Flyers would be screwed. He's the Desjardins of his time in the essence that he shows up every single night and you can expect what to get out of him. He doesn't do his job loudly, like Chris Pronger, but he does it effectively and better than just about any other Flyers defenseman of the decade.

Ben's take:  Two and a half seasons isn't a lot, but he has been incredibly consistent, and was an All-Star to boot. 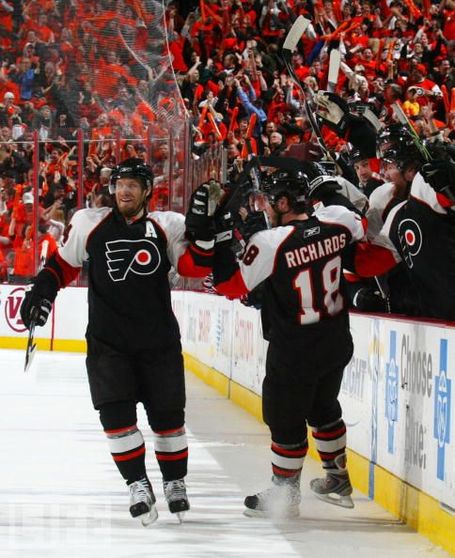 This one was definitely a toss-up.  In a field of mediocre goalies, Esche gets the nod over Martin Biron, Antero Niittymaki, Roman Chechmanek, Jeff Hackett and Brian Boucher.  Seriously, any of them have arguments in their favor - Chechmanek in particular put up a .923 save percentage and 1.96 goals against average in Philly; Boucher backstopped the team to within a game of the Stanley Cup finals; and Biron took them to the Conference finals - but Esche backstopped arguably the best Flyers team of the decade and was better for longer than Brian Boucher.

You may disagree, and you may have a better argument, but Esche was the unanimous choice here.

Ben's take:  Chico gets the nod from me over Boucher because of a decidedly longer stint at the #1 slot.  Boucher at his best was better, but Chico was a starter on both sides of the lockout.

Travis' take:  Brian Boucher.  To me, it was kind of a toss-up between Boucher and Esche, considering both guys took the Flyers within a game of the Finals in this decade. Boosh's return at the end of the decade pretty much solidifies his spot for me. 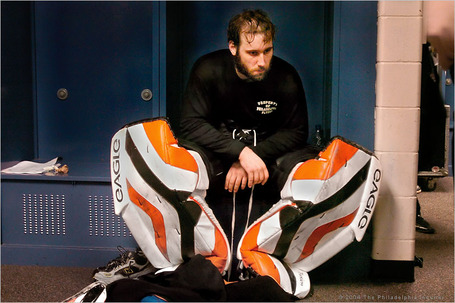 A depressing picture, but one that stuck with me for awhile.  Front page of the Inquirer, if I remember correctly.

Basically, the Honorable Mentions are those just outside of the top 20 who were seriously considered - and in some cases preferred - but they are arguable.  Feel free to argue your point.  Who do you disagree with? Who do you agree with?  Who did we leave out?  Who should we have left out?