Live From The Winter Classic: Fenway Ice In Great Shape

Share All sharing options for: Live From The Winter Classic: Fenway Ice In Great Shape

BOSTON -- After arriving in Boston early this morning, I had the chance this afternoon to wheel around the Fenway Park ice surface along with other members of the media and several alumni from Flyers and Bruins teams of the 1970s, including Joe Watson and Dave Schultz.

The ice is in excellent condition. I admit, I'm no expert on the subject of ice quality, but I have skated on NHL ice before, I've skated on terrible ice before and all other qualities in between. From my experience, the Fenway surface is in great shape. Sure, it probably helps that it's absolutely frigid today here in Boston, and with rain and snow forecasted for tomorrow night and Friday, things could certainly change.

I overheard several media people mention that, as CSNPhilly's John Boruk mentioned on Twitter, the Fenway ice is in fact a lot better than the ice was this time last year at Chicago's Wrigley Field. As FanHouse's Eric McErlain wrote after the media skate at this time a year ago, "there were a number of obvious ruts on the ice" adding that "direct sunlight also did some work, melting the ice down to the paint in more than a few places."

Those problems were nowhere to be seen as I spent about 45 minutes on the ice today. When you consider that the Boston area saw heavy rain on Monday afternoon for a few hours, Dan Craig and the rest of the NHL's ice crew deserve a pat on the back.

After the jump, some more on the ongoing construction at Fenway and the preparations for Friday's game, including several more pictures from around the park.

First off, there was a rumor on Twitter today that I also received in my inbox a few times that said the NHL was going to postpone the game until Saturday. Sources at the NHL say that it's way too early to make that determination. Still, rain and snow are in the forecast for Friday, with an expected high of 38 degrees.

The Flyers will arrive in Boston tonight after their game in New York City against the Rangers. The Bruins have a home game tonight across town against the Atlanta Thrashers. We don't want to look forward too much, and well, it's hard to do so personally since I'm in Boston and unable to watch the game tonight, but hopefully the Flyers don't have my mindset.

We found out today some of the pre and in-game festivities that will be put on by the league on Friday afternoon. Bob Clarke will be joined by Bruins Hall of Famer Bobby Orr and US Army Staff Sergeant Ryan R. LaFrance in dropping the ceremonial first puck. James Taylor will sing the American anthem while Canadian recording artist Daniel Powter will perform "Oh, Canada!" There will be a fly over by the Missouri Air National Guard, and Boston natives Dropkick Murphy's will perform pre-game as well.

During the first intermission, a few selected fans will shoot pucks at frozen blocks of ice containing Bruins autographed jerseys, and whoever smashes the most ice will win a signed jersey. That's all very reminiscent of the way the Flyers revealed their Winter Classic uniforms back over the summer.

Now it's time for some pictures. Here's the scene outside of Fenway Park along Yawkey Way.

I stepped into the Red Sox team store opposite Fenway Park, which has been converted into a Winter Classic apparel shop. There may be a huge Philadelphia presence on signage in and around the park, but as soon as you step into the store, you're quickly reminded that this is indeed still a Bruins home game.

There were two huge flags draped over the Green Monster in left field as I stepped onto the field, but about 20 minutes afterward, they were removed. Presumably, they will only be there during the anthems prior to the game, considering that as you can see if you look closely behind the Canadian flag below, they cover other Winter Classic signage.

Here are some more shots from around the park, including the Green Monster once those flags were taken away. All the snow you see on the ground is artificial, created today by snow machines. 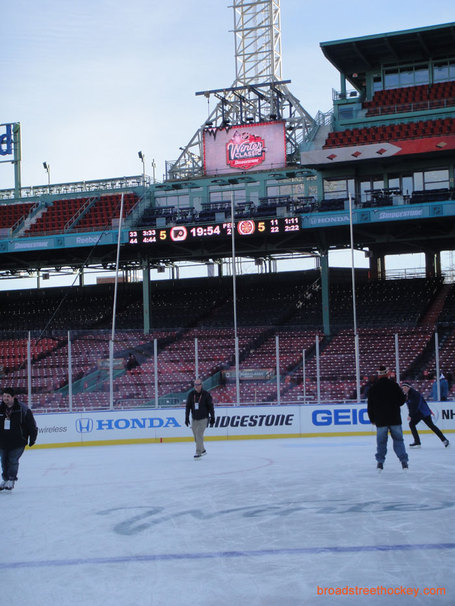 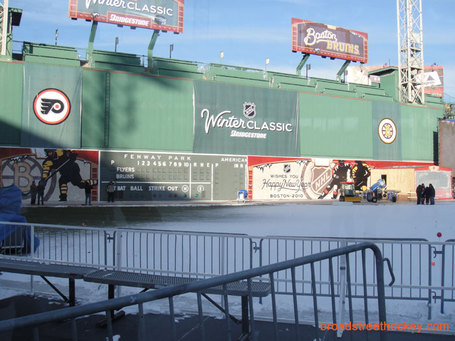 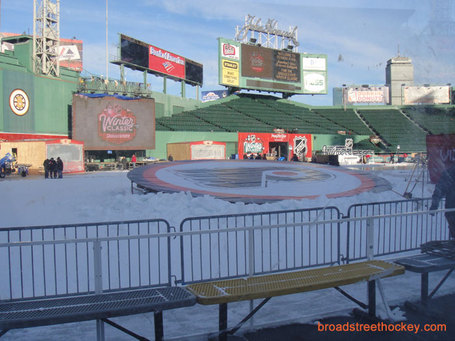 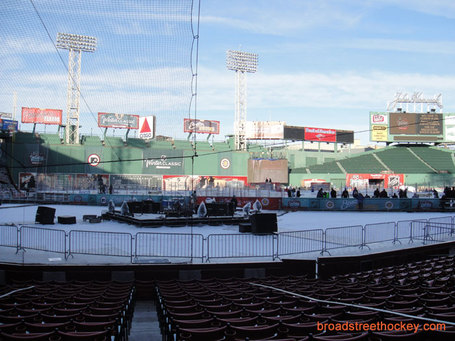 As mentioned, several Flyers and Bruins alumni joined the media for the skate. Let's play name those alumni! 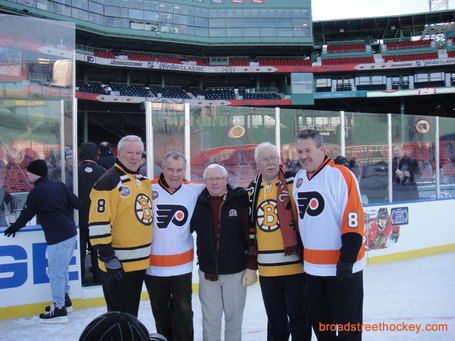 Finally, a shaky video lap around the ice.

That's all from Fenway today, but I'll be back at the ballpark bright and early and I'll be right here on the site all day long, so be sure to keep checking back.