With Emery Out Six Weeks, Are There Other Goaltending Options?

Share All sharing options for: With Emery Out Six Weeks, Are There Other Goaltending Options?

Since Ray Emery was placed on Injured Reserve with an abdominal tear and will be out an estimated six weeks, the Philadelphia Flyers might want to look at acquiring a goalie for the rest of the season.

Currently, the Flyers are going with Brian Boucher as the starter and Johan Backlund the backup.  Not exactly two goalies you expect to be on a Stanley Cup contending team.  Asking those two to be the only two goalies for around 20 games (from December 8th to January 20th) is a little scary: that's almost a quarter of the season.

Do you feel comfortable with Boucher and Backlund manning the pipes for that long?  Do you trust Ray Emery to return in exactly six weeks, ready to play at a level similar to his start?  It's understandable if you don't.

So, what about goalies possibly available via a trade?  After the jump, a look at Brian Boucher, Johan Backlund, and a few potential goalies available.

Boucher has been around for awhile.  The former 1st round pick in 1995 broke into the league in 1999-2000, but never really had a firm grasp on the starting job anywhere he really went.  He has never started more than 40 games in a season, which he did in 2002-03 in Phoenix.  There, he split time with Sean Burke, Zac Bierk, Patrick Desrochers, and Jean-Marc Pelletier.

He is making his North American debut this year with the Adirondack Phantoms.  So far, he has a 6-8-0 record, with a 2.81 gaa and .903 save percentage.  Everything out of Adirondack suggests Backlund is a big reason why the Phantoms are even in most of the games.  He's even received this praise from Phantom forward Matt Clackson:  "I'm happy we still have him.  He's good enough to be up there (the NHL)."  Well, now he is.  How long it lasts and how well he does is anybody's guess.  But let's hope he's better than we first saw in the preseason. 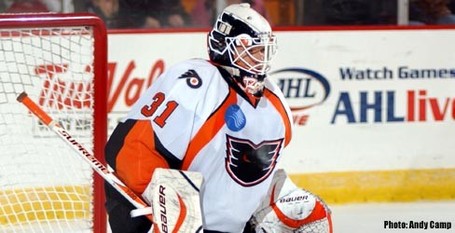 Now, if those two didn't inspire confidence, there are plenty of options outside the organization.  As would be required, I went to CapGeek.com to look at what the Flyers could afford.  Their daily cap calculator says the Flyers have over $3 million in cap space available.  They also estimate $4.7 million available in "acquisition space (full-season cap hit.)" Not sure if I believe that, especially with the Jones fiasco, but CapGeek is generally pretty good.

With that in mind, the first goalie who would surely pop up in conversation would certainly be former Flyer Martin Biron.

What's important when looking at Biron though - other than the fact that he played for the Flyers the past two plus seasons - is his one year, $1.4 million deal he just signed.  With Rick DiPietro starting to practice again, Biron appears to be the odd man out on Long Island.  His short and affordable contract makes him easy to trade, something the Flyers certainly like.

Next, the Flyers might look at Carey Price.  The beleaguered Canadiens goalie carries a cap hit of $2.2 million and will be a restricted free agent at the end of the year.  Over the summer, there were rumors that saw Price coming to Philadelphia, but that never happened.

The obvious upside with Price is that he's young (still only 22) and certainly has a lot of talent.  Playing in Montreal can never be good for young goalies, so a trade could possibly see Price up his game.  The downside is that he might just have a fragile psyche, no matter where he plays.  He also could suffer from the hype, as a lot of people watch him play and leave unimpressed.  Lastly, since he'll be a restricted free agent after the season, the Canadiens will probably want something significant in return.

Another goalie worth looking at is Dan Ellis.  Due to be an unrestricted free agent after the season, Ellis carries a cap hit of only $1.75 million.  Since breaking into the league in 2007-08 and stealing Chris Mason's starting job, Ellis has since lost his job to Pekka Rinne.  That could make his value drop, which would further help the Flyers.

Again, the numbers so far this year aren't very impressive at first.  He's 27th in GAA and 23rd in save percentage, while he's 35th in even-strength save percentage at .918.  At 5-on-5 he has a very pedestrian 2.60 gaa.  The best attributes of Ellis are that he has post-season experience (2.52 gaa, .938 s%), has previously gotten hot for a stretch, has a modest cap hit, and the Predators are a favorite trading partner of the Flyers.  The downside is that he's just not an elite goaltender, nor is he young enough to warrant a risk at age 29.

Continuing down the list of inexpensive, soon to be free agent goaltenders, next on the list is Josh Harding.  Stuck behind Niklas Backstrom in Minnesota, Harding has failed to have a breakout year.  His best season was last year, when he posted a 2.21 gaa and .929 s%, but that came in only 19 games (with a 3-9-1 record).  He's off to a horrible start so far, but it's only been 6 games.

Obviously, those numbers are pretty bad.  But, the good news is that it's a small sample size.  Also, his even-strength save percentage is only .874, good for 63rd out of 67 goalies.  His 3.29 5-on-5 goals against average isn't any better.  Why is a goalie who's playing so poorly even being mentioned?  He's only 25, he's coming off his best season as a pro, he's inexpensive, and he has good career numbers - 2.57 and .916.  Bad?  He's only played 64 games and has a career losing record, playing in a defense-first system.  Either way, the asking price would be lower than most other available goalies, and the upside is clearly there.

While rather unlikely, another name that could surface is Jean-Sebastien Giguere.  He has a cap hit of $6 million on a contract that expires after next season, but he's lost his job to Jonas Hiller (who, coincidentally is an unrestricted free agent after this season) and doesn't appear to be happy about it.

This year, Giguere has been good, but not great.  There was a great story by Jonathan Willis the other day breaking down Giguere's play the past few years that showed his poor showing last year was mostly a result of his father dying in the middle of the season.  Needless to say, Giguere - a former Cup winner and Conn Smythe winner - would be the type of elite goaltender so many people want the Flyers to have.  However, he's 32 years old with a very large cap hit.  The Flyers don't have enough room to take on that salary, so a high priced player would have to go back to Anaheim, which might be a bit difficult to swing since we already traded high-priced players this off-season.

Other goalies of note who will be free agents after the season include Johan Hedberg, Cory Schneider, Jaroslav Halak, and Antero Niittymaki.

What do you guys think?