The Flyers were outworked, outhit, and outscored 4-0 by the Blues tonight in St. Louis. 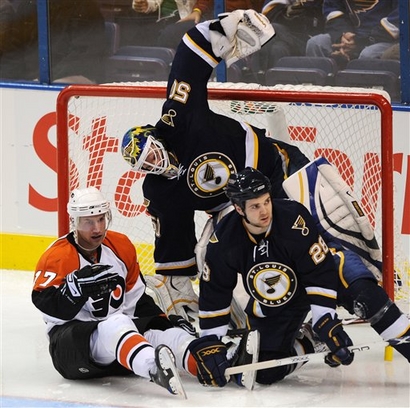 I don't care. You just lost 4-0 to the worst team in the Western Conference. That cannot happen. Period.

B&P's Take: The Blues just beat the Flyers in every aspect of the game tonight. Chris Mason was astonishing, stop all 36 of the Flyers shots. Antero Niittymaki wasn't bad either, but the rest of the team didn't hustle in front of him.

When you go 0-for-11 on the power play, you don't win. It doesn't matter who the opponent is. The special teams, or lack thereof, lost the Flyers the game tonight.

The Blues are a young team with a lot of talent, and if they were fully healthy, they'd be threatening to make the playoffs. They're a physical team, and boy did they take it to the Flyers tonight.

The flu keeping Jones and Coburn out meant Luca Sbisa and Lasse Kukkonen both got a chance to play. The pairing of Sbisa and Matt Carle was a minus-2.

The officials were busy tonight, and it didn't help that one of the linesmen went down with an illness before the game. It was interesting watching two refs and a linesman try to officiate the game, though... especially one that featured 23 minor penalties.

This game sucked. I'm done talking about it. Forget it, move on. Three full days to focus on Boston.

1. Do the Flyers focus on St. Louis or do they play like they’re looking ahead to Boston? It certainly didn't look like it. They just didn't play well tonight at all. As soon as the Blues scored that first goal, which came immediately after they killed a two-minute-long Flyer 5-0n-3, you had a feeling it was going to be a rough night.

2. The Flyers lead the league with 52 fights, but St. Louis isn’t far behind with 43 (fourth in the NHL). Cam Janssen is the Blues leading tough guy. Former teammate of Aaron Asham. Sounds like a fight to me? It certainly was a fight, and it was a good one. I'd call it a draw but it was a little unfortnate the stripes jumped in so early. I'll throw up the video when it pops up on the YouTubes.

3. Mike Richards broke out of a little slump last night with three big points. What’s he do for an encore? Well, he got in a second period fight with Dan Hinote to try to boost his team. It didn't work, but at least he tried.

Comprehensive playoff update, as well as a roundup of the rest of the action in the NHL tonight after the jump...

standings as of tonight's games

Games today that affected the playoff picture (rankings are current)...

Washington beats the defending champs, continuing their home ice success. The Wings are falling, losers of five straight now. They move a point behind the idle Devils with 66 points. For a recap, let's go to The Peerless Prognosticator, a Caps blog...

It’s one thing to come from a couple of goals down to beat a bottom dweller. It is another thing to take a game away from a team you’re tied with at the second intermission when that team is the defending Stanley Cup champion skating on your ice with the third highest number of road standings points in the league. Figuring out a way to win close, highly charged games against quality opponents is perhaps the last lesson a team has to learn to be a credible championship contender.

The Flyers next opponent, the Bruins, beat the Rangers 1-0 today in Beantown. The Rangers still sit just one point ahead of the Flyers, but they've played three extra games. The NY Rangers Blog does the honors...

...is there a less entertaining team in hockey right now? They're almost unwatchable. I don't care that they had 35 shots on goal, not a single one of them was a tough chance. No crashing the net, no offensive flow. Just trapping. It wasn't until late in the game when Renney finally abandoned the trap did the Rangers show some offensive ability. But they've got to play the system to win.

Our closest rival right now, perhaps, is Montreal. The Flyers lose, Montreal wins. Bad news. Thanks to the Rangers loss, the Habs move up into fourth place, with two games in hand over New York and the same amount of points. They're also one point ahead of the Flyers, but we've got the game in hand. Habs Inside/Out with the recap...

With two minutes to play in the game Saturday afternoon, it looked like the Canadiens were headed to their fifth straight loss. But that is when the Canadiens woke up and put an end to their longest losing streak in two years with a 4-3 win over the Los Angeles Kings.

Trailing 3-2, Christopher Higgins scored a beautiful goal - his first since Nov. 26 and only his sixth of the season - when he went around Kings defenceman Drew Doughty and beat goatender Jonathan Quick with a shot to the top corner.
(11) Toronto 5, (10) Pittsburgh 4

It was Doug Gilmour night in Toronto as the Leafs retired number 11 in honor of their former captain. They got a win too over the flailing Penguins. Toronto might be trying to convince themselves they have a chance now, as the win pulled them within nine points of the Pens. Pittsburgh dropped from 9th to 10th with the loss, one point behind Florida but with two extra games. JDunman from Pensburgh with the scoop from Pittsburgh...

The Penguins should not have lost to the Toronto Maple Leafs. No ifs, ands, or buts about it. A Penguins team that came out of the All Star Break with their eyes on the prize should not lose to the Toronto Maple Leafs. Yes, they lost to the Devils last night, but New Jersey is red-hot and the Penguins still got a point out of the game. What did they get out of this game? Shattered momentum and solidly sitting out of playoff contention. Are they out for good? Of course not...but results like this doesn't give room to much optimism.

It was a big game for the Panthers tonight as they looked to stay red hot. They needed a win to keep pace with Carolina and they didn't get it. With the loss, Florida dropped from eighth to ninth, one point behind Carolina. They still have two games in hand though. The Drive For Five (that title has to be a golf reference), an Isles blog, is excited...

Thankfully for the Isles, Mike Comrie scored a sneaky goal after catching Tomas Vokoun behind the net that got them the lead. Bill Guerin’s spin move goal in the third was also pretty surreptitious as well. Considering the move the Islanders captain pulled earlier in the game, where he almost broke a Florida Panthers’ defenseman’s legs, it’s fair to say that he had his best game in quite some time.

Add in another goal from Kyle Okposo and I have to say, this was probably the Isles’ most complete game of the season.

Thanks to the Panthers losing, the Hurricanes move into the playoff picture in the eight spot. Two first period goals were enough for the victory. Red and Black Hockey has the details on the goaltender duel between Cam Ward and Kari Lehtonen...

On Saturday night, the Hurricanes again had a "must win" game at home against the hapless Thrashers. With goals by Matt Cullen and Ray Whitney and a shutout by Cam Ward, they got the job done. The 2-0 win was the third shutout of the season for Ward and the 101st win of his career.

I’ve seriously got to tip my hat to Atlanta netminder Kari Lehtonen. Without his brilliant play, it could have easily been 8-0.

Cam Ward was sharp in the shutout, but he only faced 19 shots. Lehtonen faced more than that in the first period alone.
(7) Buffalo 2, Phoenix 0

Buffalo needed the win to keep pace with Carolina and they got it done against the Coyotes, who believe it or not were as high as fifth in the Western Conference playoff picture this week. That conference is nuts... Vancouver is in 11th but they're only four points behind fifth place Anaheim. The loss hurts the 'Yotes, as they dropped to eighth. The Sabres stay in seventh but they pick up ground on the Flyers -- just six points back. They're also only two points ahead of 10th place Pittsburgh though. Die By The Blade, a Sabres blog, tells the story...

When a team only has five defensemen playing in a game, and when most of those defensemen are still green, a good goalie is the best chance for them to win the game. Ryan Miller was everything that he had to be for the Sabres to pull out the 2-0 win against the Coyotes tonight. Miller stopped all 28 shots, including 15 in the first period alone on his way to his fourth shutout of the season.

Overall, the Flyers drop one spot to sixth tonight, but they're just one point out of fourth with games in hand. But don't look in the rear view mirror, Philadelphia. There's a buncha hockey teams stuck in traffic right behind us.

Around the League: The Leafs honored Doug Gilmour by raising his number 93 to the rafters ... Leaf rookie Luke Schenn delivered a huge hit on Evgeni Malkin in the same game ... Detroit rookie (kinda, he's 25 and played for a few years in Finland before getting a shot) scored a beautiful spin-o-rama goal, his first in the NHL ... Dallas beat Columbus 7-3 to regain a spot in the playoff picture, capping a remarkable comeback from a dreadful start of the season ... Columbus is in the playoff race, say what? ... Sundin apparently has made the Canucks worse; he's played nine games and Vancouver has lost their last eight ...