Would you like some Phillies baseball with your playoff hockey? 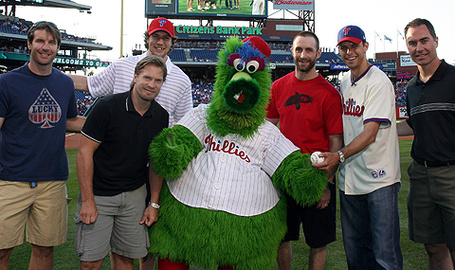 Out-of-market Philly sports fans, you're in luck. Major League Baseball and the National Hockey League have reached an agreement on a joint online viewing package which combines the rest of the NHL schedule on GameCenter Live with the 2009 baseball season on MLB.TV. Here are the details from The Biz of Baseball:

This special bundle for United States residents will be available for a one-time fee of $139.95 beginning Monday, February 16 at MLB.com and NHL.com.

This first-of-its-kind content partnership will allow subscribers to watch every regular season game, more than 100 Spring Training games and the first two rounds of the World Baseball Classic in 2009, via MLB.com, and up to 40 out-of-market NHL games per week for the remainder of the current regular season as well as select Stanley Cup Playoffs games, via NHL.com (blackout and other restrictions apply).

>> The Biz of Baseball

That's right. You can now watch Cole Hamels mow the Mets down in order before flipping over to watch Joffrey Lupul send the Caps home in Game 7. And it's a lot cheaper than buying the packages separately, so if you were going to buy MLB.TV anyway, why not buy this? The only downside is that this virtually means nothing to phans in the Philadelphia area, considering MLB.TV and NHL GameCenter's stingy blackout restrictions.

This is a pretty cool package, especially since I feel like a lot of hockey fans are baseball fans too. I know that personally, the seasons overlap so perfectly that I'm never out of the everyday sports loop. When the Flyers let me down in April or May, I can go right to the Phillies. Last season when the Flyers lost in the Conference Finals, my buddy and I went right from the Wachovia Center, where we were watching the game on the jumbotron, to Citizens Bank Park, where the Blue Jays and Phils were in the middle of a rain-soaked afternoon of baseball. We bought standing room tickets and enjoyed four innings of baseball before remembering the giant egg the Flyers laid in Pittsburgh.

My point is that, overall, I think this is a good thing for hockey. First off, it gives the league a little more legitimacy when America's pasttime is willing to partner with them. Secondly, this is going to draw more people to hockey. You get more for your money, and baseball fans who might not ever watch hockey could still buy this package. It gives the NHL exposure during what is the most exciting time of the season.