Niittymaki has earned the starting job

Share All sharing options for: Niittymaki has earned the starting job 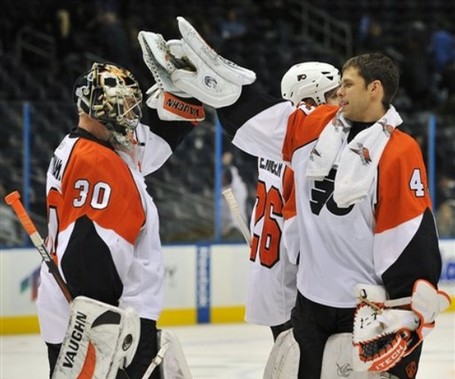 Martin Biron's days with the Philadelphia Flyers may be numbered. His days as the club's starting goaltender appear to be over. Biron, whose contract (at $3.5 million per season) expires at season's end, had lost four straight games before starting Saturday against Boston at the TD Banknorth Garden in Boston. In that game, Biron looked shaky, allowing the Bruins to jump ahead 3-1 on 15 shots. He was pulled for backup Antero Niittymaki, who stopped all 22 shots he faced in a 4-3 come-from-behind win for the Flyers. The word is, the Flyers are going to now try to ship Biron out before the trade deadline.

If this report can be believed, the Flyers certainly soured on Marty Biron pretty quickly, didn't they? Well, it's not all that farfetched when you look closely at the situation.

The stats show that Antero Niittymaki has been the better goaltender since the start of 2009. He's only lost four games in regulation all season, and his 13-4-4 record completely trumps Biron's 15-11-4 mark.

Niittymaki has not lost two games in regulation back to back all season long. Among his most impressive performances this season include 48 saves and one goal against versus Washington and 45 saves in an OT loss against San Jose, the best team in the NHL.

But his success this season has been virtually overlooked by the concern that Niittymaki has always been inconsistent. He's always been a guy that could get hot for stretches, but would eventually come back to earth. The Flyers have seemingly been waiting for him to come back to earth all season long, but that hasn't happened, and there are no signs that it will happen.

People forget that Niittymaki was the MVP of the 2004 Olympic games and that he led the Phantoms to the Calder Cup in 2005. He has the experience to carry this team -- it just hasn't come at the NHL level yet because he hasn't been given -- or earned, perhaps -- the opportunity.

Meanwhile, Martin Biron hasn't won a game in six starts. He's been the inconsistent one this season. He had his chance and simply hasn't been the better of the two goalies. He's not bad, and we know from last season that he has the capability to take this team deep in the playoffs, but he hasn't earned the chance to do that this season. He hasn't outperformed Niittymaki.

It's Niittymaki's job to lose, now. He's put in his dues and he's earned that right.

Could the Flyers trade Biron? While Niittymaki has earned the right to be the starter, I don't believe that they have enough confidence in him to get rid of Biron at the trade deadline. If Niittymaki performs down the stretch as he has all season and earns the playoff starter role, what happens if he gets hurt in the playoffs? A Biron-less team means that Scott Munroe is the playoff goaltender, and that just isn't okay.

Besides, what could the Flyers get in return for an inconsistent goalie that is an unrestricted free agent in July? Probably not much. The Flyers would be silly to ship Biron out before the summer.