Share All sharing options for: Sluggish against a last place team, Flyers lose 5-2

The Flyers lost to a last place team for the second time in five games, this time 5-2 to the Ottawa Senators. 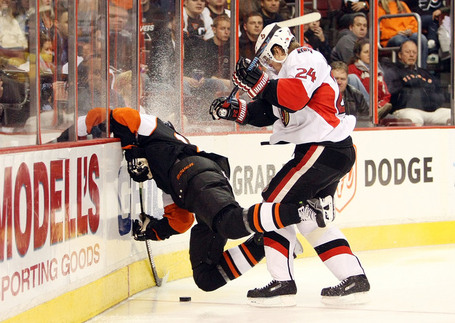 photo by Nick Laham via d.yimg.com

The Senators were flying around the ice tonight and the Flyers simply weren't ready for it. Ottawa got their fair share of lucky bounces, but they also were better in just about every aspect of the game.

Niittymaki puts in a weak performance

Niittymaki, who earned the job of starter before this game, was not on the ball at all. He allowed several weak goals and just didn't seem focused. He was out of position late in the second period and Ottawa's Nick Foligno put the puck into an empty net --  a crucial goal that made the game 3-0 instead of 2-0 heading to the third.

Niitty was convincingly outplayed by Sens rookie goalie Brian Elliott, who made several key saves to keep the Flyers off the board throughout the game.

His performance tonight is not encouraging by any means, but given the back-to-back nature of the next two games, he'll get right back in the net. Hopefully, he'll let us forget this outing when he plays Sunday against the Rangers.

It seemed like every time he touched the puck tonight, it was glancing off of his stick in the offensive zone and out to center ice. He couldn't accept passes with any level of dependability tonight, and he continues to fail in proving he deserves $2.75 million a year.

By the end of the first period, Claude Giroux and Mike Richards had switched spots in the lineup. Giroux was centering the third line with Darroll Powe and Scottie Upshall while Richards was back between Mike Knuble and Simon Gagne on the top line.

Those lines seemed to work better, as both units scored goals in the third period, representing the Flyers comeback. That comeback was abruptly halted by Antoine Vermette, who put the Sens up three with five minutes remaining.

The Sens have won three straight for the first time and, believe it or not, are thinking playoffs. From the AP recap of tonight's game...

"We've beaten two pretty good teams the last couple of days," Heatley said. "We are feeling good about ourselves."

Nick Foligno and Antoine Vermette also scored for the Senators, who still trail Florida by 14 points for the eighth and final Eastern Conference playoff spot. Ottawa has 29 games remaining, one more than the Panthers.

Are the Senators daring to think about the playoffs?

"It's definitely not out of the question," said captain Daniel Alfredsson, who picked up an assist and leads the Senators with 49 points. "It's possible. We won the first two games of this road trip. Who knows? We just can't look too far ahead."

14 points out with five teams to pass. Who are they kidding? You don't go from last place to the Cup by winning three straight, Alfie.

Overall, it was not a terrible game by the Flyers, but they were sluggish and did not match the intensity of the Senators. Hopefully Niittymaki brushes this game off and comes back big on Sunday. It should be Martin Biron in net on Saturday afternoon against the Islanders, though.