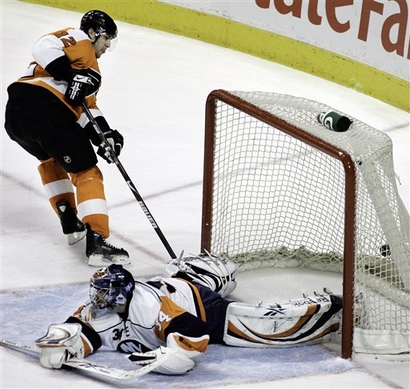 Sometimes the doctor prescribes just what you need. That's what he did for the Flyers on Saturday afternoon as they beat the New York Islanders 5-1.

All of the problems that have been plaguing the team lately -- the goaltending, the unlucky bounces, being outworked by the opponent -- turned around today. Martin Biron put in 60 minutes of quality netminding. The Flyers got the bounces, which led to two critical goals. They outworked the Islanders. Hell, even Randy Jones played a good game today. This is exactly the way the Flyers need to play and this is exactly what they needed before heading up to Manhattan tomorrow afternoon.

The Flyers were up 2-0 when Andy Hilbert put a beautiful shot over the shoulder of Biron to pull the Isles within one. There were 10 minutes left in the third period, and you kind of got that groaning feeling inside again.

It went away quickly. Philly responded with pressure in the NY end immediately following the goal and they were rewarded with a goal that bounced off of an Islander player to me it 3-1. 13 seconds later, another bounce glanced off of an Islander stick to make it 4-1. The goal was originally said to have bounced off Scottie Upshall, but it was later corrected and the goal was given to former Isle Arron Asham. Less than a minute later, Simon Gagne scored on a penalty shot to erase any doubt that the Flyers would lose the game.

Upshall had a fantastic afternoon that started off with a delicious feed to a wide open Claude Giroux, who put his second career goal home for the first goal of the day. He then was key in the Asham goal. Overall, he was a plus-3 for the game.

John Stevens shuffled the lines all game. Giroux started out with Upshall and Darroll Powe, but Upshall played with Asham and Powe, Carter played with Powe at one point. The only line that seemingly stayed intact the entire game was the top trio of Mike Richards, Simon Gagne, and Mike Knuble.

Stevens' manuvering worked, and the Flyers will look to make it two straight in a huge game tomorrow afternoon at Madison Square Garden.

An interview with Dominik of Lighthouse Hockey appears after the jump.

Interview with Dominik of Lighthouse Hockey: Dominik and I exchanged some banter about our respective clubs the other day, but thanks to the internet we both failed to get our answers on the web prior to the game. Nevertheless, here are his answers to my questions. You can catch my answers to his questions over at LH.

Broad Street Hockey: Can you try to briefly explain the Islanders' current situation with the Coliseum and the future of the team on LI to someone who doesn't follow it? I've tried and it's just too much to wrap my head around.

Lighthouse Hockey: This is a *very* simplified version, but in a nutshell: Islanders owners dating back before Charles Wang have known they need a new building but have never figured out how to get it. The current Coliseum lease (expires in 2015) is awful and the local politics for altering it or securing approvals for a new building are very complex (many would say dysfunctional).

After years of effort, Wang and a real estate partner came up with a plan to totally renovate the Coliseum and develop the land around it (mostly on their own coin -- this isn't a "taxpayers, buy us a building" thing). That plan has Nassau County's blessing, but right now the deal is going through a state-mandated environmental review, and after that there will be more Town of Hempstead politics -- which have been the source of the recent tension you may have heard about.

BSH: What are your thoughts on former Flyer Richard Park?

LH: I love him. It's tempting to look at the Islanders roster and think, "wait, Richard Park gets that many minutes?" But he's fast, a jack-of-all-trades, a good penalty killer, he has the hands to convert when given the opportunity, and is apparently very respected in the locker room. Both Ted Nolan and Scott Gordon, two very different coaches, seemed to be big fans. He's the kind of useful, solid guy I think a playoff team that scouts well would try to rent. But I think the Islanders will want to hang on to him.

BSH: The Islanders are supposed to be rebuilding around youth, but the leading point getters on the team are all the old guys like Weight and Guerin. Is that a concern, and have you seen growth among the younger guys on the team like Okposo?

LH: Yeah, part of that is the youngsters are learning on the fly. The decision to actually rebuild rather than patch the team with Fedotenkos and Vasiceks only came at the end of last season. So Weight an Guerin, who both get considerable PP time, still lead the team and help guide the youngsters. But since December, with the team's fate pretty clear, Scott Gordon has been giving Okposo, Josh Bailey, Frans Nielsen (who was hurt), and Blake Comeau (who was in the AHL) more responsibility. I'm not concerned, as I'm seeing these guys progress -- particularly Okposo -- game by game.

BSH: Rick DiPietro. Uh, what happened there? And was that contract worth it?

LH: Where to begin? A hip injury during last year's all-star skills competition began a weird back-and-forth where he tried to play through injuries and the Islanders either let him or didn't ask the right questions, and didn't feel the need to inform fans exactly what was going on -- until it got absurd earlier this season. He had hip and knee "clean-up" surgeries over the summer, but it's actually the then-"minor" knee surgery that has caused the problems and shelved him for the season. My hope is they get five strong years out of the remaining 12.

A 15-year contract, in my book, is never excusable unless you have Gordie freaking Howe and he's still giving you an annual discount. For exactly that reason: the risk of injury is too great, too unpredictable -- particularly for a very active butterfly goalie. It's the Islanders' luck that all of these injuries (there were concussions, too) started so soon in his career, yet after they had his name on a 15-year deal. I suspect Wang, who was behind the Yashin deal, just wanted a guy to be the face of the franchise and show that players wanted to be here to build it back up.

BSH: How long do you think it will be before the Islanders can contend again?

LH: Philadelphia is certainly an example of how a team can turn it around quickly, but the Flyers had more in the cupboard and were far more attractive to free agents. If they are in the playoff bubble late in either of the next two seasons, I'll be happy. If they're not in the playoffs by year three, it will either be because big new mistakes were made, or because their ridiculous injury curse (350 man-games this year and counting) has continued.

Thanks to Dominik for answering my questions. It's easy to respect a guy that's as dedicated to his team now in the tough times as he was during their glory years.

My apologies for not being around during the game. I had internet connection issues all day long. Hopefully they're panned out by tomorrow. Remember, it's at 12:30 on NBC. Go Flyers.