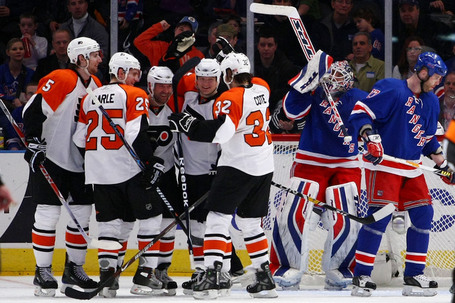 The Flyers waltzed into Madison Square Garden and delivered a message to the New York Rangers today. They beat them left and right, up and down, and catapulted themselves into a stronger hold on the fourth spot in the East at the same time.

For the Rangers, it was a nightmare. It was a representation of all their problems -- inconsistent goaltending, and inability to score, and a terrible power play.

Flyers dominate -- but only half the game

The Flyers controlled the play for the first 30 minutes of the game. They didn't give the Rangers any room to move with the puck, and a four goal outburst in the second period put the Rangers in a hole they wouldn't get out of. It was absolute domination in every possible way. Every line contributed. They even ran goalie Henrik Lundqvist from the game.

But the final thirty minutes of the game were a different story. The Flyers, up 5-0, clearly sat back as the second period came to a close, and then throughout the third period. Luckily for them, the Rangers couldn't score on a soccer net, and Martin Biron was the best player on the ice.

Marty is taking advantage of his chance, isn't he? With Antero Niittymaki, who apparently had earned the starting job over Biron just last week, out with the flu, Biron is giving coach John Stevens something to think about. He followed up a 38 save performance yesterday with a 35 save outing today, and he was the difference between the Flyers holding their comfortable lead and the Rangers potential comeback.

Game Thread Roll Call: A new feature I'll be doing for the rest of the season. I'll be tallying up the comments and who does them, and at the end of the season/playoffs, whoever has the most will win some sort of Broad Street Hockey prize. A little bit of competition should be fun.

Up Next: The Flyers are off until Thursday, again. These lay offs are seriously getting old. I feel like this is NCAA hockey or the Phantoms where they only play on the weekends. Anyway, it's a tough schedule the rest of the month and the Flyers are going to have to build upon the wins this weekend. Buffalo, Thursday, 7 PM. Go Flyers.