Share All sharing options for: Flyers keep it rolling, take care of Sabres 6-3 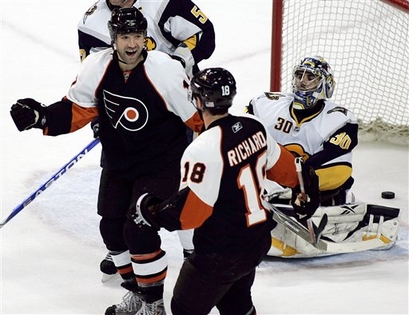 The Flyers kept the wins coming last night as they beat the Sabres for their third straight. Mike Richards had five points (2 goals, 3 assists) to lead the way. The output by the Captain was a career-high and he was far and above every other player on the ice. He also went 17-for-24 in faceoffs.

All four lines contributed tonight. It was a stellar offensive effort, probably best personified by an amazing second period shift where the Flyers just wouldn't give up the puck. They kept it in the Sabres end for minutes and eventually found Braydon Coburn sneaking in along the far side, where he beat Miller with a laser.

It was a theme of the night. Miller was outstanding in net, and when he's able to see his shots coming he's extremely tough to beat.  The Flyers worked the puck laterally across the crease all night long, and several players had beautiful passes in that regard -- Matt Carle and Claude Giroux come to mind immediately.

Giroux had a fantastic game. He didn't have any points to show for it, but he was all over the ice and made noise each and every time he touched the puck. Darroll Powe is another guy that really impressed -- as he has since his call up. He worked hard all game and was rewarded with an empty net goal at the end.

The offense as a whole has been unreal lately, scoring 16 in just three games. It's even more promising that they've done it without Jeff Carter, who hasn't scored in four games. It'd be nice to see Jeff back on the hot scoring path, and the way his season is going, it will return. But the Flyers have done an excellent job stepping up while his

The game was much closer than the 6-3 score makes it seem. The Flyers scored two empty net goals after breaking a 3-3 tie with a little over six minutes to play. Buffalo was allowed to stay close by Martin Biron, who didn't play horribly -- he made 39 saves -- but certainly let up his share of weak goals. Besides Mike Richards shortie, the penalty killers didn't support him, allowing Buffalo to put two past in with the extra man.

As a whole, however, the number of penalties per game has started to come down, so that is a welcome sign. It was a solid effort last night by the Flyers and they were rewarded as such.

After the jump, a look at the playoff race and the game thread roll call.

standings as of Friday morning

It was a busy night in the NHL last night. Four other games impacted the Eastern Conference playoff picture, so let's get right to it.

(9) Carolina 6, (15) NY Islanders 2 -  Carolina needed this win, and they took care of business against the worst team in the league the way it would be expected of them. Eric Stall score two goals, while former Flyer Dennis Seidenberg added a goal and an assist. Jon Sim scored for New York. The win allowed Carolina to keep pace with Pittsburgh, who won...

(10) Pittsburgh 5, (6) Montreal 4 - The Habs struggles keep on coming, although the Penguins certainly tried to give this one away. Pittsburgh held the lead three times before giving it right back to Montreal, but a Sergei Gonchar goal with seven minutes remaining broke a 4-4 tie and gave new coach Dan Bylsma his first NHL win. Montreal drops just a point ahead of Florida and Buffalo, who hold 7th and 8th place, while the Pens move within four points of the final playoff spot. They must leap frog Carolina before taking it, though.

Chicago 4, (8) Florida 0 - Good news for Buffalo fans who felt agony of the loss last night. And good news for the 'Canes. And the Penguins. And Montreal. Florida loses! Regardless, though, they've only lost three games all month.

(3) New Jersey 3, (13) Tampa Bay 2 SO - For the second time this season, the Devils beat Tampa in a shootout, and at the same time, they stole a chance for the Flyers to make up some ground. Tampa had a 2-0 lead before the Devils tied it early in the third, and then Zach Parise got the winner in the penalty shot contest. Had the Devils lost in regulation, the Flyers would've sat six points behind the Devils with three games in hand. Instead, they sit eight back with those three extra games. Philly needs wins in those three games. Period.

Shagg has the early lead for the exclusive Broad Street Hockey prize! chrismchaines and Have A Seat are the closest competitors.

Favorite comment: "And just think, a few years ago being called Phillies-esque would have been an insult…" - doubleh

Up Next: Pittsburgh comes in on Saturday afternoon and they're a desperate team. The Flyers will need to match their intensity level, as they did against the Sabres, if they want to pull out a victory. 1 PM. Penguins. Be here. Go Flyers.