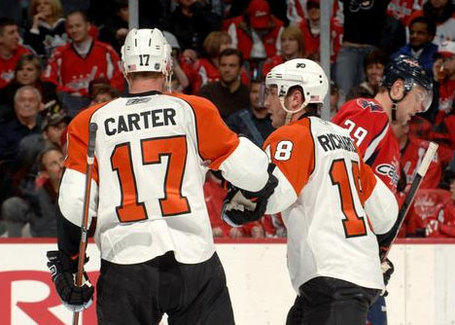 I thought I knew what my headline was going to be tonight. Theodore slams door shut as Flyers fall... But then, Scott Hartnell decided to make up for his three trips to the penalty box on the night with a shot over the glove hand shoulder of Jose Theodore. Just like that, a dominating performance by the Washington goalie was a tie hockey game, and that wouldn't last long.

Three minutes later, Jeff Carter broke his five game scoring slump by picking up a loose puck and slamming it past Theodore. The Flyers suddenly had the lead and they wouldn't look back. Arron Asham of all people would add another tally two minutes later and two late Washington penalties would seal the deal for the good guys.

Kimmo Timonen's absence was noticed on the back end, especially on the power play. Washington had several shorthanded breakaways and odd-man chances which probably wouldn't have occured if Timonen were there. Randy Jones was his replacement on the PP and it wasn't pretty, costing the Flyers the first goal. But after that, Antero Niittymaki saved the team over and over again.

Instead of Theodore becoming the hero in this one, it was Niittymaki who stole the spotlight. In addition to stopping those shorthanded chances by the Caps, he made several key stops while the score was 2-1, including one on a Brooks Laich breakaway in the second period. He boosted his stellar record against the Southeast Division to 11-0 while notching 33 saves.

The Gagne-Richards-Knuble line had a ton of jump tonight, but it was the Hartnell-Carter-Lupul line that spurned the comeback. They have been a little quiet in the last few games, but they joined the party tonight with a combined two goals and four assists.

Tom Poti played in his 700th NHL game and was welcomed to it by Richards, who absoulutely decked him along the endboards in the first period. If you missed it, here's the link. If you did catch it, watch it again.

All in all, it was a great win for the Flyers tonight -- perhaps one of the best of the season. It was a full team effort with all four lines contributing, which is by far this teams greatest strength. They gave the Capitals just their six regulation loss on home ice this season and they showed a bit of the never say die swagger they had in the playoffs and down the stretch last season.