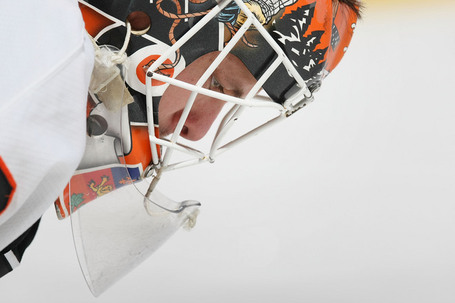 This goalie controversy thing isn't going to go away any time soon, is it?

Martin Biron stepped up tonight and, coming off his unbelievable blunder on Saturday, shut down the young Kings 34 times for the 25th shutout of his career. His solid performance will no doubt cast a larger spotlight on the ongoing Philadelphia goalie controversy.

As the playoffs get closer, I think we all get a little more worried about how this is going to play out. Yeah, it's great that both guys are playing pretty well right now, but if the Flyers don't have one guy as the starter when the playoffs start -- well, that could be a recipe for disaster.

But tonight, Biron was solid. He followed up Antero Niittymaki's great effort last night with one of his own tonight. And he had to be good. His offense, which has been so potent over the last week, couldn't muster anything tonight. One ugly goal and an empty netter that wasn't even easy on 20 shots is nothing to write home about. That's okay -- those nights happen every once in a while. Perhaps the team was tired from expending so much energy against Washington. Again, it's understandable, but only because Marty stepped up big time.

He was matched by his counterpart at the other end of the ice. Erik Ersberg made 18 saves, several of them very impressive. He was helped by his defense, as any Terry Murray club is sure to be strong defensively. The Kings did an excellent job in cutting off cross-ice passes and getting sticks in passing lanes.

Los Angeles played a very good hockey game tonight, but luck simply wasn't on their side.

I've got a few things planned for around here tomorrow so be sure to pop in on the off day for that. Should be an interesting day leading into Briere's return on Friday. Go Flyers.