Share All sharing options for: Briere is coming: Metropolit and Vaananen waived 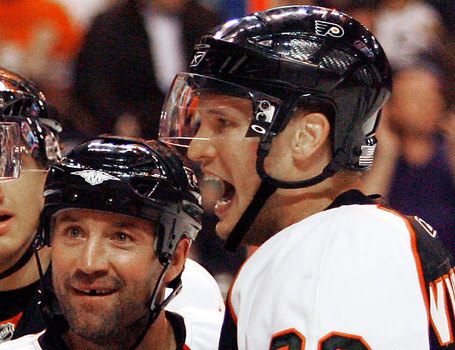 You hear that? It's the sound of Danny Briere making his way toward the Wachovia Center ice. From CSNPhilly.com's Tim Panaccio...

In anticipation of Danny Briere being re-activated to the Flyers on Friday, the team waived center Glen Metropolit and defenseman Ossi Vaananen on Thursday, CSNPhilly.com has learned.

Once Briere is activated, his $6.5 million salary is added to the cap. At that point, the Flyers will have to lose about $2.58 million. Thursday's moves erase $2 million in salary.

If the Flyers waive Lasse Kukkonen ($875,000), they will have enough money to activate Briere and get under the $56.7 million cap limit.

Metropolit and Vaananen each earned  $1 million.

General manager Paul Holmgren confirmed both moves but would not discuss what moves come next.

Now, correct me if I'm wrong, but I was under the impression Lasse Kukkonen wasn't against the cap? He's already been waived and he hasn't been recalled, so the Flyers should be under the cap as it presently stands. If I'm wrong here, which I very well may be, then moving Kukkonen down right now seems like a no-brainer as long as Kimmo Timonen is healthy enough to play tomorrow.

That is seemingly the sticking point. Word out of practice is that Timonen did not feel well enough to go this morning and he did not skate.

Of course, the big question here is whether this was the right move or not.  There were several guys the Flyers could have chosen to move, Metro and Ossi being among the choices, obviously.

Darroll Powe, Riley Cote, Arron Asham, Claude Giroux, and Metro are the forwards that were considered on the potential chopping block.

In the case of Metropolit, it seems to be a numbers game. The Flyers needed to clear a certain amount of cap space to prepare for Briere -- the $2.58 million number Panaccio mentioned. Metro makes $1 million dollars, more than any of those other guys, and considering his offensive production has been rather stagnant this season (4 goals, 10 assists in 55 games), his demotion makes sense on all levels. (Except the human level, guy is a class act.)

When you look at the other guys, a case can be made to keep all of them over Metropolit. Powe has been an excellent energy guy and a solid contributor to his line. Giroux has done nothing but impress since his call up, and in 20 games, he already has as many goals as Metropolit did all year. Arron Asham is a tough guy the Flyers need, but he also proved the other night he can puck the biscuit in the basket as well. As for Cote, my guess is that the Flyers simply do not feel comfortable with just Asham as their enforcer.

Cote only played five minutes last night, and just under three against Washington. He has become marginal on the roster, but as I said, it was probably a pure numbers game at the end. Metropolit makes half a million more than Cote, and the Flyers desparately need that extra cash under the cap.

Vaananen's waiver is disheartening, but we all could've seen it coming. Since Ryan Parent has been with the Flyers, Vaananen has been a healthy scratch in five games. He only recently got a crack at returning to the lineup when Kimmo Timonen went down with an injury. He has been the odd man out, unfortunately, since Parent's return, and that's just too bad for a guy who played very solid defense all season long.

Will Briere even play tomorrow? The Flyers are not saying anything definite. John Stevens said today that “we will know in the morning" and that "we will decide [tomorrow] morning whether he is going to play or not.” These two moves have to make you believe he will play tomorrow, though.