Briere's back, so who's he play with?

Share All sharing options for: Briere's back, so who's he play with? 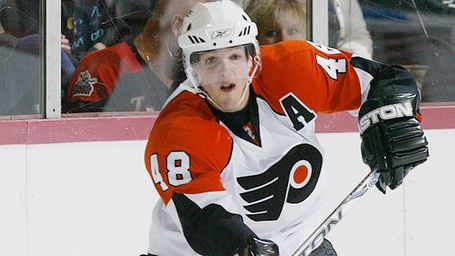 If all goes according to plan, the Flyers will welcome Danny Briere back into the fold tonight. His return, if he is indeed finally healthy, is a huge boost for the team. Look at it this way: the Flyers, a second place team, are adding a thirty goal scorer to a lineup with five twenty goal scorers.

But the negative effect of all that scoring is that there is no obvious spot for Briere to fit in the lineup. He's played most of his games this season with Simon Gagne and Mike Knuble on his wing, but Mike Richards has filled in quite well on that top line.

Okay, so there's the second line of Joffrey Lupul, Scott Hartnell, and Jeff Carter. Well, for amount a month and a half of the season, those three might've been the hottest line in hockey. To date this season, they've got a combined 90 points together. Too much chemistry to break up. In fact, they're probably the only untouchable line on the team.

Briere is without a doubt a top six forward. Would you insult him by putting him on the third line? Would that even insult him if you're rolling your top three lines evenly? Do you mix up your lines completely with his return? Does he play center or wing? The options truly are endless. Where do we begin?

If you don't want to split up any of the current lines, this is where Briere fits in. It shifts Darroll Powe down to the fourth line where Glen Metropolit has been playing while creating three really dangerous lines. Technically speaking, this would be the Flyers "third line" so the knock against this one happening is that Briere shouldn't be on the third line. But imagine the speed of this trio. Not to mention the vision of Giroux added to the scoring touch of Briere. That's just scary to think about.

When the Flyers first signed Briere back in July of 2007, we all drooled over the idea of Gagne playing with Briere. Needless to say, we've been disappointed. We got about 25 games of it before Gagne went down with a concussion last season, and of course Danny has only played in nine games this season. So the prospect of seeing both of these guys, healthy, playing together - the creativity, the crafty skating, the French accents - is extremely exciting. Add in Knuble who can keep up with the other two while complementing them with strong work on the boards and in the crease, and you've potentially got one hell of a line.

Gagne and Briere together are, as mentioned, an appetizing notion. Giroux could really see his potential skyrocket playing with these two. The only knock on them would be that they're extremely small and very soft. But these three on a line would bring elements of speed, crafty passing, and uncanny vision all to one place. And of course, more French accents.

There are certainly many more than just these three intriguing options, but we could be here all day listing the possibilites. These are simply the best three that come to mind. It's a good problem to have, and I'm sure John Stevens will ponder the options happily.

So, where do you see Briere falling in?