Share All sharing options for: Peco powerless: Flyers lose to Habs in OT 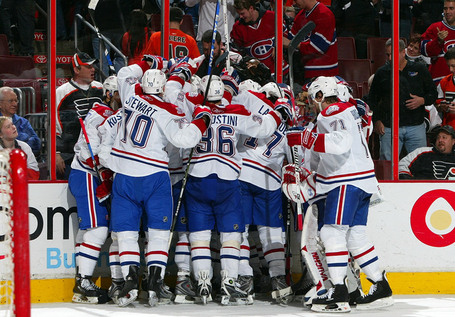 The best home power play team in the NHL goes 0-for-8 on the power play in a home game. That's unacceptable.

Yeah, sure, maybe you could say that Scottie Upshall was unfairly called for a penalty in overtime. And on that ensuing power play, Montreal puts the game winner in past Antero Niittymaki. But the Habs took advantage of their opportunities. The Flyers did not. Plain and simple.

The Flyers didn't deserve even a point in this one. After jumping out to a very quick 2-0 lead, it looked like the orange and black would cruise in this one. And then Antero Niittymaki imploded and Montreal entered the first break up 3-2. The Flyers would tie it on a Simon Gagne goal, but they had ample chances to put the game away and they couldn't do it. This loss falls on the whole team.

Philly had a great shot to put Montreal on the ropes and really take a giant jump in the Eastern Conference standings. A win would've kept pace with New Jersey and firmly solidified the Flyers in the top four teams in the conference. But with the loss, Montreal gets a point closer and now sit just three points back. The Flyers, meanwhile, are six points behind New Jersey.

An interesting take: So apparently, this Flyers fan has turned into a Canadiens fan. I'm not sure how that happens, or why God would be so cruel to this tortured soul, but nonetheless, it's a fun read form her experience at the game last night.  PS: If the author of that post read this, please comment. I'm curious about how the hell this happened and will hire someone to perform an exorcism.