Questions For The Enemy with Stanley Cup of Chowder

Share All sharing options for: Questions For The Enemy with Stanley Cup of Chowder

In preparation for the Flyers upcoming home-and-home with the Boston Bruins, and considering the Bruins are the only Eastern Conference team we've yet to see, Evan over at Stanley Cup of Chowder appeased me by answering a few of my questions. 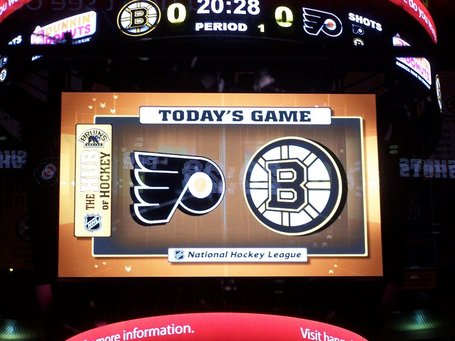 BSH: How surprised are Bruins fans that your team is where they are right now? Did you guys expect it... at all?

SCoC: I thought that they would be much improved this year, but I didn't expect them to be this good. At the beginning of the year, I would have predicted them to be somewhere around a 6 seed in the playoffs this year. Expectations were higher than usual this year after taking the Habs to 7 games, but anybody who says that they predicted the B's to be this good is a liar. A lot of the younger players have made big strides this year: Phil Kessel has developed into a legitimate goal scorer, David Krejci has exceed all expectations, and Blake Wheeler stepped in right away and contributed to the big club.

BSH: Do Boston fans have any ill will toward the Flyers for what happened to Bergeron and Alberts last year?

SCoC: I think anytime that there are questionable hits especially when such serious injuries result, there is going to be some ill will. The Jones hit did cost Bergeron pretty much an entire season. I think that will still be in the back of everyone's mind on Wednesday night because this will be the first time that Bergeron will take the ice vs. the Flyers since the hit. I didn't think that Randy Jones intended to injury Bergeron. I thought it was just poor timing. I'm not sure everyone else has that same view point. I can't say the same thing for Hartnell's hit on Alberts. I thought that Alberts was in a vulnerable position and Hartnell still lined him up for a hit. But, apparently that is water under the bridge because both of those guys are in the Flyer's room now.

BSH: Speaking of Bergeron, he suffered another injury this season. How has that affected his recovery from last season and how has he been since returning?

SCoC: They said that the second concussion was unrelated to the first concussion, but who knows. It had been a long road back for Bergeron after missing most of last season and then to have another concussion on top it certainly must have been frustrating for him. The second concussion was definitely a setback for him but he has been able to return to the lineup with no apparent lingering effects. Unfortunately, he hasn't looked like the player he was two or three years ago. His production is down, but he has still been solid in all three zones, strong at the dot, and a major asset to the Bruins.

BSH: The Bruins have three NHL-caliber goaltenders, and two of them are free agents this summer. What do you want them to do, and what do you think they will do?

SCoC: The Tim Thomas/Manny Fernandez tandem has worked very well this season. I think that they should stick with what has got them this far and figure out the rest in the off season. A lot of people are calling for Fernandez to be traded and to let Tuukka Rask be the #2 behind Thomas. With the lingering injuries to Fernandez and his large expiring contract, I don't think that there will be a huge market for him at the deadline anyways. I would be very surprised if the B's moved Fernandez at the deadline. As for the offseason, they can't afford to keep both Thomas and Fernandez. I think what will probably happen is that the Bruins will try to sign Thomas in the off season (if he doesn't want too much), let Fernandez walk and let Tuukka Rask be the backup.

BSH: P.J. Axelsson has gotta be like 60 years old, right? It seems like that guy has been a Bruin since before I can remember.

SCoC: He's actually only 33 but Axie has been a Bruin since 1997. He is one of those guys that does the little things. He provides a great veteran prescence on a relatively young team and is still one of the best penalty killers in the league.

BSH: The Beanpot Final is next Monday. Who wins: Boston University or Northeastern?

SCoC: I'm a BU fan so I gotta go with my Terriers. Northeastern looked very good the other night though. It should be a good game.

For what it's worth, I think Northeastern is gonna take the Beanpot. Should be a good game, though.

Head on over to Stanley Cup of Chowder, which should win some award for best blog name, to check out my answers sometime before game time.