Share All sharing options for: Phantoms sold to Pittsburgh group

Once the final puck drops at the Spectrum this season, the Philadelphia Phantoms are no more.

Comcast-Spectacor, the Philadelphia-based sports and entertainment firm, announced today it has reached an agreement to sell the Philadelphia Phantoms hockey team, the Flyers top American Hockey League affiliate, to the Brooks Group of Pittsburgh, PA, owners and investors of other minor league hockey and baseball teams. In keeping with company policy, terms of the deal were not disclosed.

Comcast-Spectacor will continue to operate the Phantoms until the conclusion of the 2008-09 hockey season.

Ever since the ownership decided to close down the Spectrum, there have been rumors about what will happen to the Flyers AHL affiliate. Keeping the team local would have allowed the Flyers and Phantoms to continue using the same practice facility. The current set up has excellent advantages when it comes to seamless transition between the clubs. I have been a strong advocate of keeping the Phantoms local, but it appears they explored every avenue to no avail. Where were the possible local destinations for the team?

Atlantic City, NJ: This was my personal choice, but as a former Atlantic City Boardwalk Bullies season ticket holder, I'm biased. Peter Luukko said "Atlantic City was never really an option." Comcast-Spectacor was probably afraid that, given the demise of the Bullies, who moved to California after four unprofitable seasons (despite winning an ECHL Kelly Cup), the Phantoms in AC just wouldn't be profitable.

Allentown, PA: Allentown, and the Lehigh Valley in general, has been perhaps the most popular destination, but there's no building there as of yet and the Phantoms would not have been able to play there next season.

Trenton, NJ: Trenton was an option simply because they have an arena, but it's a relatively small building and the Devils own the team that already occupies the building.

Philadelphia, PA: Yes, there were rumors that the Phantoms would simply play at the Wachovia Center. It's a nice dream, but there's a reason they don't do that now. There's simply no room for them with all the other obligations the building has.

Bellmawr, NJ: Bellmawr didn't recieve a lot of press, but they have an ambitious waterfront project in the early stages right off the 42 freeway and I-295  that would include retail shopping, an IMAX theater, and a 6,000-seat arena. This would be a fantastic option for the Phantoms -- perhaps the best of all those proposed -- as Bellmawr is just five minutes over the Walt Whitman Bridge. There is no building there yet though, and in the current economy there is no guarantee it will get done.

I also heard Reading, PA and Dover, DE a few times, but Dover is another city with no history of hockey and no building and Reading, like Trenton, already has a team in the ECHL.

So what does this mean for the Flyers AHL affiliate next season? The agreement transfers ownership of the team to the Brooks Group of Pittsburgh, but all hockey operations stay with the Flyers. Brooks will relocate the team. To where? We don't know, but given that they are a Pittsburgh-based group with ownership in the Pirates and Penguins, Western PA could be an option. I don't know of any available arenas there, though.

Maybe Wilkes-Barre becomes the Flyers affiliate and they put the Phantoms in the Pittsburgh area? We'll see. An announcement is expected in the next few weeks.

RIP Phantoms. It's been fun. 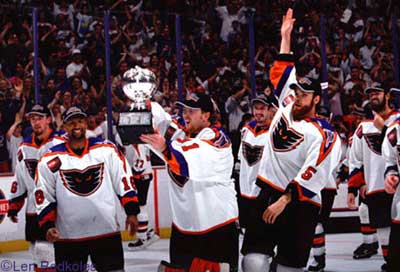