The Flyers were missing Mike Richards, Scottie Upshall, and Braydon Coburn to the flu Wednesday night and the rest of the team couldn't overcome the loss as they fell to the Bruins 3-1 at home. 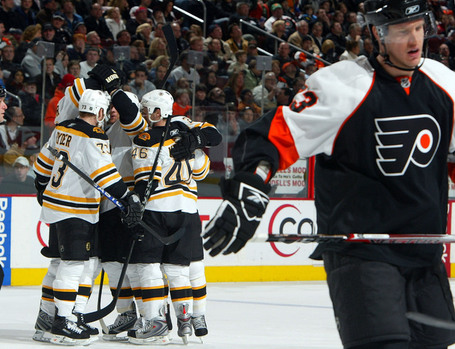 photo by Jim McIssac via d.yimg.com

BSH's Take: The Flyers could certainly use the flu as an excuse tonight. They were missing their captain and one of their best defensemen, not to mention a ton of the guys on the ice are feeling the effects of the illness as well.

But unfortunately for the Flyers, the best team in the NHL was in the house last night, and they're not going to be sympathetic. It's the NHL, and whether you're sick or not, you should play a full, complete 60 minutes of hockey.

In the first two periods, the Flyers showed they could hang with the Bruins. They showed that they had what it took to beat them. They owned the first period, controlling play for most of the first twenty minutes. Tim Thomas had to make a few excellent saves to keep it a scoreless game. In the second period, Boston scored a flukey goal, but Philadelphia responded immediately, with Claude Giroux pressing in the next shift, and then minutes later, Joffrey Lupul connecting with Scott Hartnell to tie the game.

Boston worked harder in the third period and they won the game because of it.

One interesting note: Boston only recieved two penalties in the game and both were for goalie interference. Perhaps part of their game plan was to get body pressure on Biron?

Questions With Answers: For those that are new to my recap style, this is a feature I've been using for a few months. I got the idea from SBN's Minnesota Wild blog Hockey Wilderness. I asked five questions before the game, and here I will answer those questions based on what happened during the game.

A playoff picture update after last night is after the jump...

There were two other games Wednesday night that affected the Flyers and the Eastern Conference playoff outlook.

(10) Pittsburgh 4, (12) Tampa Bay 3 OT -- We thought the Penguins were dead. Then Evgeni Malkin happened. Down 3-0 at the start of the third to the Lightning, the Penguins stormed back to beat Tampa in overtime 4-3. Malkin scored two, including the game winner. A loss would've been devastating to Pittsburgh, not only because it would've come against the lowly Lightning, but because they would've been three points out of the playoff race with eighth-place Florida holding three games in hand. Instead, they still sit in tenth but are just one point behind the Panthers.

(7) Buffalo 5, (11) Toronto 0 -- Buffalo keeps gaining on the Flyers. They rolled over the Leafs, who might've thought they had a chance there for a minute being just nine points off the pace. Thomas Vanek had a natural hat trick which pulled him even with Jeff Carter with 32 goals. The Sabres sit two points behind the Flyers now, but we do have two games in hand.

One final note, a special thanks to Shagg, doubleh, SCoC, and Moonage Daydream for contributing to the first game thread in Broad Street Hockey history. 100 comments not bad for the first time, eh?

Philadelphia is off until Saturday night when they travel up to Boston to face against these same Bruins. 1 PM puck drop. Be here. Go Flyers.