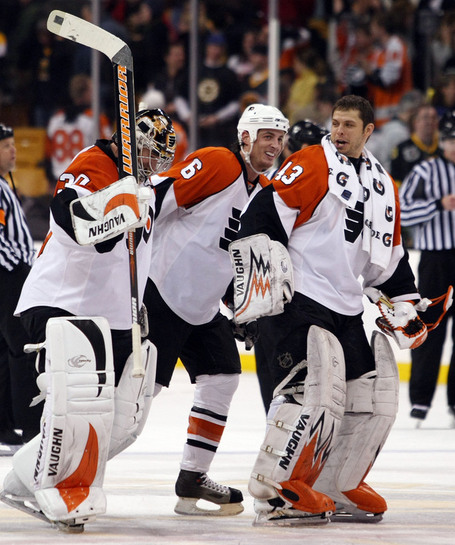 photo by Elsa/Getty Images via d.yimg.com

They booed him all game long in Boston for his hit on Bergeron over a year ago, but he got the last laugh in as he threw a puck wide of the net, it hit Andrew Ference in the knee, and found it's way past Manny Fernandez. 4-3, Flyers in OT.

The Flyers could've rolled over and died. Down 3-1 after the first period -- a period in which they played pretty well -- they could've packed it in. Boston's too tough. We couldn't score on them at home, we'll never do it here.

But that's not what they did. Instead, John Stevens made a goalie change and the Flyers responded. Within eight minutes, it was a tie game again, 3-3. The power play got back on track with a goal from Hartnell, and the unlikeliest of parties, former Bruin Glen Metropolit, put home a pass from Aaron Asham.

Metropolit was clearly pumped up to play in Boston again. He was all over the ice and seemed to make a ton of good offensive plays despite his regular linemate being the not-so-gifted Asham. The lines were kind of a mess all game long as the Flyers had just 11 forwards dressed. Thanks, flu.

The penalties were much, much better today. Only three were called against the Flyers compared to six for Boston, and you could tell that they were more focused on stopping the lazy mistakes. The Bruins, on the other hand, were committing the same kind of fouls the Flyers have been guilty of over and over the past few weeks.

Antero Niittymaki stood tall in this one. He came in for Marty Biron, who was pulled after the first, and he pitched a shutout in 40-plus minutes, including several big saves in overtime and the third period.

Scott Hartnell was the best Flyer though today. He was all over the ice and he got a big goal in the second period to tie the game by pick pocketing rookie Blake Wheeler right in front of the net and jamming it past Fernandez. He was consistantly mixing it up with the Bruins and he might have gotten them off their game a bit.

Overall, a quality win for the Flyers. They showed a lot of resiliance in coming back from a 3-1 deficit and they proved that they can beat the best team in the league. Better yet, they did it without their captain in the lineup.

Solid, much needed win for the Flyers. Atlanta tomorrow, or as commenter doubleh put it, Nittylanta! 3 PM.  Build on this win. Go Flyers.