It was closer than it should've been, but Jeff Carter's 100th career goal stood up as the game winner as the Flyers beat Atlanta 3-2. 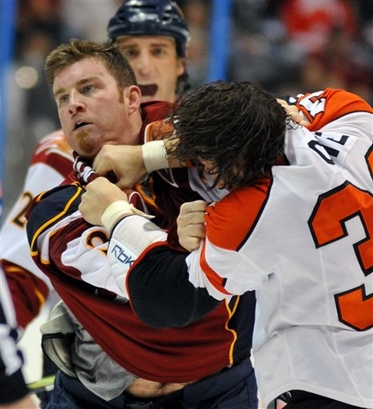 The Flyers came back from three goals down yesterday, but Atlanta almost turned the tables on them today in the third period. Coasting behind a strong performance from Antero Niittymaki and a two goal effort from their leading scorer, the orange and black let off the gas pedal a bit and allowed Atlanta to re-enter the hockey game.

The Flyers got caught taking some of those lazy penalties that they did such a good job of getting rid of in Boston. Matt Carle went to the box for cross-checking and on the ensuing power play, Ilya Kovalchuk made him pay by putting it into the back of the net. 3-1. On yet another power play, Viktor Kozlov put a bullet over the shoulder of Niittymaki to make it a one goal game.

Fortunately, the Flyers were able to hold off the Thrashers down the stretch, but if Philadelphia doesn't let their foot off the gas, this game isn't as stressful.

I thought Claude Giroux was exceptionally impressive centering Gagne and Knuble today. He made a ton of nice passes to his linemates and didn't look out of place at all. I don't think the Flyers should send him back down once Briere and Richards are back, but there are decisions that will have to be made when it comes to Giroux's future this season.

Jeff Carter scored his 99th and 100th career goals today, and had a few chances to score on an empty net at the end of the game for what would have been his first career hat trick.

The win puts the Flyers solely in fourth place, moving one point ahead of Montreal, but the rest of the competition in the playoff race will continue to pile up games over the Flyers this week, considering the next game for our guys isn't until Thursday.

Three full days off until Ottawa on Thursday. Go Flyers.