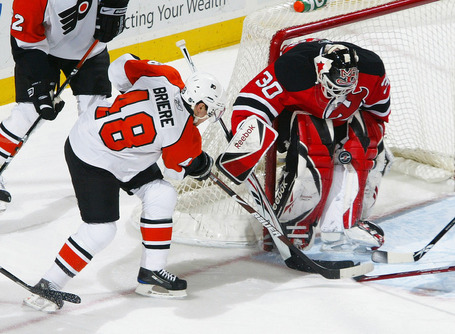 It was the biggest game of the season. A win would've kept the Flyers firmly in the Atlantic Division race, with games in hand allowing the Flyers to stay neck and neck with the Devils. It was Danny Briere's first game in months. The Flyers needed this one.

And with the exception of the first twenty minutes, they played like it didn't matter.

Sure, maybe it was the fact that every shot towards the net was blocked by the New Jersey defense, and the few shots that did find their way through were easily turned aside by the best goalie the in the game, Martin Brodeur. That can be extremely disheartening.

But the Flyers had just one quality scoring chance in this entire game. That is just unacceptable when you're playing in a game as important as this one, regardless of how strong the opponent is.

The offense was flat and they were simply outplayed by the Devils. When the Flyers are playing like they can, they are one of the best teams in the NHL. But too often, we see games like today, where the Flyers seemingly do not put their best effort forward, or they give up too easily.

Give all the credit in the world to the Devils. They played good hockey today, but this game could've been closer if the Flyers played like they gave a damn.

It just had to come against us, didn't it? The legendary goalie put on another show for the hometown fans today, and they rised in appreciation as the final seconds ticked off the clock. He's now just five wins short of passing Patrick Roy for most all-time.

For another take on the game, check out this fanpost by Marc. This tough stretch of games continues Tuesday night against the Bruins in Boston. Until then, enjoy the snow and go Flyers.