Share All sharing options for: Biron brilliant in first leg of home-and-home 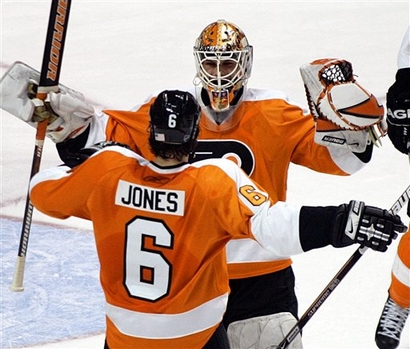 The number one job belongs to Martin Biron. Period. He was absolutely brilliant in yesterday's 4-2 win over the Rangers in South Philadelphia. With the win, Biron is now 7-3-0 in his last 11, with a .941 save percentage and a 2.09 GAA.

Halfway through the game, the Rangers were controlling the play. They were outshooting the Flyers 18-8 an out-chancing them substantially as well. Biron's solid play was the reason New York didn't run away with it before the Flyers offense got going. The Flyers has a 2-1 lead for most of the second period and into the third, and that's when things opened up.

Claude Giroux is amazing. He can make anybody on this team look like Wayne Gretzky. It's ridiculous. His feed to Arron Asham about six minutes into the third gave Philadelphia some insurance, and they wouldn't look back. About nine minutes later, Asham picked up a loose puck near center. This time, he would make himself look good as he ripped a shot from the top of the circle to beat Lundqvist and make it 4-1.

Balanced offense got it done for the Flyers today. They didn't need the power play tallies to win. Three different lines scored, and after the worries that the depth was gone with the loss of Scottie Upshall, that is a big statement. Scott Hartnell and Mike Richards added the other two Flyer goals.