Jones out, are you happy?

Share All sharing options for: Jones out, are you happy? 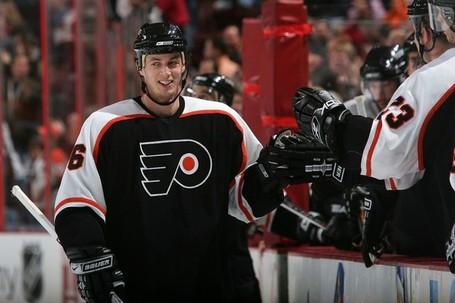 Randy Jones will miss "about a week" with one of those dreaded lower body injuries. Jones is easily the biggest scapegoat in this corner of the internet. He turns over passes, he plays defense like a lost puppy, he gets way too much ice time and he makes way too much money. We all have our reasons. But, as much as we complain about the guy, and as much as we wish there were another option, there really isn't.

Danny Syvret is the guy coming up to replace Jones. He's played 26 NHL games, and not one since the 2006/07 season. He has one -- count it, ONE -- NHL point. I'm not trying to knock Syvret at all -- I've never seen him play, that wouldn't be fair. I'm purely playing devils advocate. Syvret will not play the ice time Jones does and he apparently has a little bit of an offensive touch this year (48 points). But seriously speaking, can this guy be better than Jones? His first game is going to be against one of the best teams in the league, and that could be a lot of pressure.

The question, then, is simple. Is having Danny Syvret in the lineup better than having Jones?