Is Briere messing up offensive chemistry?

Share All sharing options for: Is Briere messing up offensive chemistry? 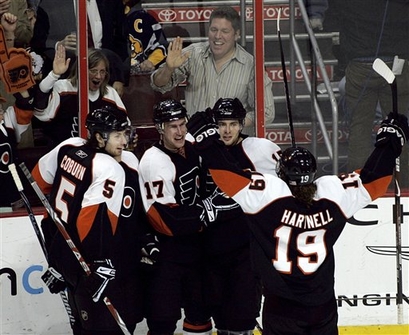 The Flyers have shuffled around lines, and the wake of these moves, the teams' most consistently effective scoring line has been split up. The offense has looked stagnant over the last two games, and we understood moves were coming. Danny Briere needs a chance, as he has yet to record a point since his return to the lineup over two weeks ago.

Briere will now center Scott Hartnell and Jeff Carter, and perhaps it will get him out of the funk he has been in. But the only thing that is certain for now is that the Flyers best line for Carter, Hartnell, and Joffrey Lupul, albeit not their "top" line, has been pushed to the way side by this move.

So will it be the right decision? My gut says yes, because if you can add Briere's scoring to this already potent lineup, you have a greatly improved team. I am worried that the chemistry between the "Center City Three" will be gone, and that the team will suffer by missing their production. The Hartnell-Lupul-Carter line has scored 73 points together this season. In comparison, the next closest trio is Simon Gagne, Mike Richards, and Mike Knuble who have 51 points together this season.

It's obvious a move had to be made. Briere's essentially useless in the lineup right now, thanks to his lack of scoring. He needed to be moved. If this works and the Briere gets back to his old scoring self, especially in time for the playoffs where he's been known as a workhorse over his career, we'll look back and say this was a good idea.

If Briere doesn't get back to his old self, well, then what?