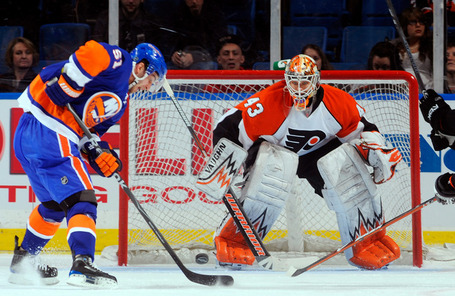 The Flyers looked dead in the water. Through two periods, they had disappointed the thousands of fans who made the trek to to Long Island by playing uninspired hockey, and they trailed the worst team in the league 2-0. They were lucky that's all the deficit was.

In the third period, though, they decided to make that trip worth it for those Philly faithful. John Stevens made a few adjustments, most notably putting Jeff Carter, Joffrey Lupul, and Scott Hartnell back on a line together. And at the same time Villanova was punching their ticket to the Final Four, that trio was reeling off three straight goals to give the Flyers the lead, just nine minutes into the period.

The Isles would tie it, but Philadelphia would go on to win in a shootout. All the credit belongs to Stevens for this one. He has an excellent handle on his team and seems to know exactly when to make moves like this. Any coach can tinker things around during practice to see what works, but making moves in the heat of a game can be a risky bet. Stevens has shown he's willing to make those bets, however, and more often than not he's been successful.

Lupul scored two of the Flyers third period goals, the 99th and 100th of his NHL career. But before the frantic comeback effort, that seemed like a rare possibility on this night. There was clear frustration on the part of the Flyers during the second period, perhaps best personified by three fights that took place within three minutes of each other. Even Simon Gagne almost dropped the gloves in a scrum midway through the third.