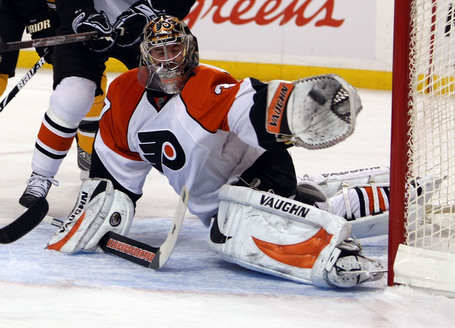 photo by Elsa/Getty Images via d.yimg.com

The Flyers played a great game tonight, powered by Simon Gagne, Scottie Upshall, and Antero Niittymaki, and they beat the best team in the East on their home ice 4-2. Due to the health of the club, they were able to roll four lines with ease, and almost every forward contributed. The top line of Gagne, Mike Richards, and Mike Knuble had eight points, including all three third period goals that led the Flyers to victory. Upshall added a goal in the first, and all game long I thought that him, Danny Briere, and Claude Giroux played with a bit of unrealized potential. The chemistry there will come with time.

While the offense may have been the story tonight, the unsung hero was without a doubt the defense. Kimmo Timonen's return to the lineup definitely gave them a boost, or as Al Morganti put it on the post game show, a calming effect. As a team, the Flyers played excellent defense, and I can think of several times where guys like Gagne and Upshall contributed on the defensive end.

In goal, Antero Niittymaki had an excellent game as well. He absolutely robbed David Krecji in the first period with flash of the leather, but he didn't stop there. He ended up with 24 saves and, again, followed up a shaky performance with an excellent one.

Another tough contest comes on Thursday night against Calgary, but before that we've got one of the most exciting days of the year tomorrow. Broad Street Hockey will be all over the Philly angle of every single trade made tomorrow, and it'll be up to the minute, so this is certainly the place to be for all of your trade coverage starting first thing in the AM.