The Devils are reeling. We can catch them.

Share All sharing options for: The Devils are reeling. We can catch them. 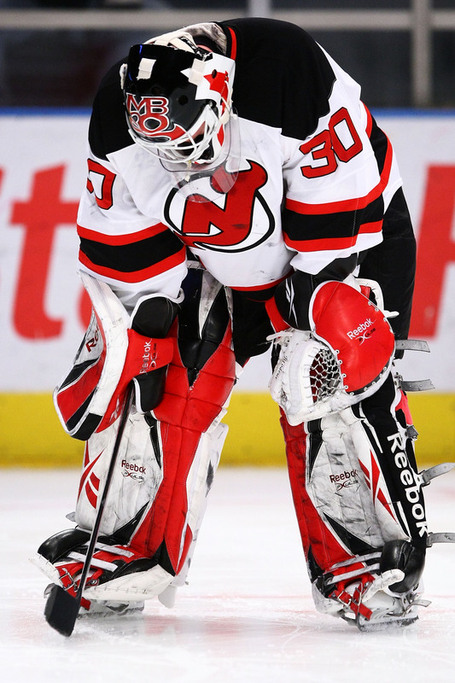 As the Flyers fell to the Bruins last night, I convinced myself that it was time to close up shop on those Atlantic Division title dreams. They had squandered a perfect opportunity to gain ground on the idle Devils, as a win would've put them within four points of first place.

But watching New Jersey tonight against the Rangers, I've discovered a new found hope. The team that we all thought was so invincible just a few weeks ago, what with the greatest goaltender to ever play the game on their roster and everything, has now lost five straight. They've lost to playoff teams -- Chicago, Carolina, Boston, the Flyers, and now the Blueshirts.

And that loss tonight was u-g-l-y. The Devils gave up 20 shots in the first period to the Rangers, one of the worst offensive teams in the league. They wound up outshooting New York by the end of the game, but as John over at In Lou We Trust explains, that doesn't tell the story at all.

The Devils were ineffective on offense.  While they threw 38 shots on Henrik Lundqvist, you could count on one hand the number of tough saves he had to make. Who had the best chances?  Zach Parise, Patrik Elias, Travis Zajac, Brian Gionta (who actually was moving all night long), or Dainius Zubrus?  None of them! it was a two on one with Brian Rolston and John Madden in the second period - likely the best chance they had all night.

This was a deserved loss.   And the most maddening thing about this is that the players and Sutter kept insisting that this was a big game.  That they haven't been playing well and they have to get up for this one.  That the Devils weren't bad against Chicago and Carolina, but lost on mistakes.

I'm tired of hearing about how the Devils need rest or that it only was mistakes.  No, the Devils were the second best team out there tonight.   And it showed.   This slump needed to end, and I, like many other Devils fans, thought a big game would get things going.   We were wrong.   This team needs a fire lit under them.

They have shown zero signs of coming out of this slump. A defensive minded team has played atrocious defense, and even the best goaltender in the history of the game cannot hold off every shot he sees. With the Devils showing no signs of breaking out of this slump, my confidence that the Flyers can pass them is as high as it's been all season.

For starters, the Flyers have an easier schedule from here on out. There's a home and home against the Maple Leafs this week, which in theory should be two wins. Meanwhile, the Penguins host New Jersey on Wednesday night in what should be a vry difficult game for the Devils. A Flyer win over Toronto on Wednesday and a Devil loss puts Philadelphia four points back with a game in hand.

NJ will probably keep pace on Friday by beating Tampa on Friday. If they lose that game, well then they've got a lot more to worry about than just losing first place. But they face a desperate Buffalo team on Saturday that needs every point it can possibly get. It's also in Buffalo. Meanwhile, the Flyers face an Ottawa team that is probably more interested tanking for John Tavares than winning hockey games.

As early as Saturday, it's not hard to believe that the Flyers could be two points behind the Devils with a game in hand. After that, the Devils close the season with games against Toronto, Ottawa, and the Hurricanes. That last game against Carolina is big.

Sure, we should fully expect the Devils to beat Toronto and Ottawa. But Carolina has been playing outstanding hockey over the past few weeks, and with all that's at stake for them, there is no reason to see them slow it down. A win versus the Devils in the last game of the season is a very real possibility.

The Flyers play the Panthers, the Rangers twice, and the Islanders to close the season. The two New York teams have been controlled by the Flyers this season, and while the most recent game against Florida was a loss, it was simply thanks to a red-hot goalie the Flyers couldn't beat.

All our team has to do is, then, win one extra game and than the Devils in that final four game stretch. With the way these two teams have been playing of  late, we should all feel confident that that can happen.

Even in the recent losses to Boston and Florida, the Flyers have played well enough to win. Two unstoppable goalies, Craig Anderson and Tim Thomas, were the reason those teams beat Philadelphia. In the Florida game, Anderson turned aside 40 Flyer shots and in the Boston game, Thomas turned aside 45 shots. You've got to give credit where credit is due, sometimes.

The offense has been outstanding, scoring 22 goals in the last six games. The goaltending has been even better. Martin Biron has honestly been better than we can ask for, facing an average of 33.2 shots in his last five games and doing the sole job of a goaltender: keeping his team in the game by any means necessary.

It hasn't been perfect, and the defense can be much better, but the simple fact is that the Flyers have put up a very good fight in every single game for the last two weeks. Positioning continues to improve and the Devils are giving them an open invitation to play leap frog. There's no reason to believe that the Flyers won't show up.