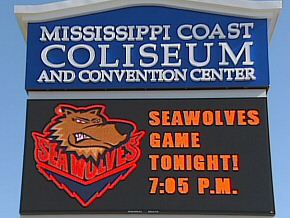 The Mississippi Sea Wolves, the ECHL affiliate of the Philadelphia Flyers, suspended operations today, according to WLOX TV in Biloxi. They will finish out the remaining two games in their season. The Flyers agreement with the Sea Wolves only lasts until the end of the current season, but now it is clear that they will have to find another team to affiliate with come next season.

That will be tough, however. The league is dwindling by the season, and as James Mirtle points out, a league that had 29 teams as recently has four years ago has now shrunk down to 19. Included in that list of teams that ceased operations are the Atlantic City Boardwalk Bullies, who closed shop after the 2004/05 season. The other local teams in Trenton and Reading are still operating, however.

The Flyers and the then-Trenton Titans held an affiliation agreement for years before the team was bought by the New Jersey Devils two seasons ago. Since then, the Flyers have held affiliations with the Wheeling Nailers and, most recently, the Sea Wolves. There is no word on where the Flyers will send their ECHL players next season.