Daniel Carcillo to Flyers for Upshall and a pick

Share All sharing options for: Daniel Carcillo to Flyers for Upshall and a pick 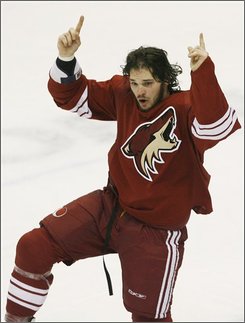 Daniel Carcillo is coming to Philadelphia for Scottie Upshall and a second round pick in 2011. It was believed originally that this was a cap space clearing move, but it looks now as if the deals are done. The Flyers had their eyes on Jay Bouwmeester and Derek Morris, but as the deadline came, J-Bo was still a Panther and Morris was on Broadway.

So given that, this deal completely boggles my mind. Let's compare the stats.

It could still be a cap deal, considering the Flyers were very close to it. Perhaps they wanted some breathing room in case of some kind of injury that could happen down the line.

Carcillo isn't really in the enforcer mold too much - at least not at a Cote level. He's more of an energy guy who fights, kind of like a less-offensively-gifted Upshall who will drop the gloves. Apparently, he's a guy who fits the Philly style and all that... but Upshall fit that as well. That's why I'm bothered by this deal.

But for what it's worth, here's what a Coyotes fan from Five For Howling had to say about Carcillo coming here.

Carcillo is a guy who hits anything in another color jersey, drops the gloves in a heartbeat, plays all out, hair on fire, balls to the wall hockey. Probably the biggest fan favorite in Phoenix other than Captain Coyote Shane Doan…maybe even more. You guys will love him… blue collar all the way, streak of mean and shifty fast, if turned loose to play his game has a pretty nice offensive upside. Gretzky had him on way too tight a leash all year.