Share All sharing options for: Carcillo acquisition a mistake 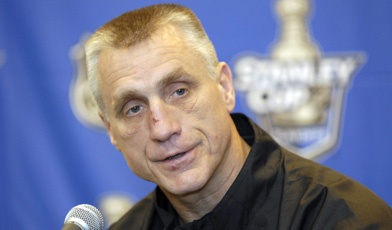 Paul Holmgren stepped in front of the media tonight at the Skate Zone in Voorhees and made his case for his deadline actions. He moved popular winger Scottie Upshall and a second-round pick in 2011 to Phoenix for tough guy Daniel Carcillo. Immediately, we all struck our palms to our foreheads.

Carcillo is a career tough guy with 174 penalty minutes this season. He's second in the league in fights, tied with Riley Cote's 18. His best offensive NHL season came in 2007/08 when he tallied 13 goals in 57 games. To be fair, Upshall's best year was last year when he notched 14 goals in 61 games, but Upshall has speed and an offensive upside. There is no doubt that Upshall is the better offensive player.

But, we still held out hope that something else would happen to make sense of this.

Then, it came. Kind of. Veteran defenseman Kyle McLaren, who hasn't played in the NHL this season, was sent over by the Sharks in exchange for a sixth-round pick. He's going to be a Phantom off the bat and he's really just a depth guy in case of injury, at this point. And that's all before we mention his $2.5 million cap hit.

Not exactly the move we were looking for. So we waited some more. It took two hours to hear from Holmgren, and when we finally did get his justification for the moves today, it didn't really calm us down any.

Holmgren said that Carcillo is going to be a fan favorite in this town. He's a cheaper version of Upshall that can fight and plays a very tough style of hockey - everything Philly is known for. But at some point, that gets old. Fan favoritism doesn't matter when your team gets weaker from the move.

The lines are shaken up with this deal. In a poll on this site last week, fans were most excited by the prospect of a Giroux - Briere - Upshall line. Last night, we saw the potential of that line, but now we won't get to see it grow. Instead, Darroll Powe will play with those two, or it'll be Carcillo. No offense to either of those players, but they don't have the offensive ability to keep up with Giroux and Briere. Upshall, while not as talented as his linemates, could keep up with them with his speed and his ever-improving offensive ability.

We've heard that this deal solidifies Giroux's spot on the NHL roster. Now, there's extra cap space and he won't have to worry if there's an injury on defense. Those who spread that opinion forget that Arron Asham can be sent down to make cap room as necessary. This past weekend was an odd situation and there is no reason, with or without the extra space the Carcillo trade brings, that Giroux should be sent down.

In the end, if we see Carcillo on a line with Briere and Giroux, we've got a problem. Yes, it will be good to see some toughness with those two, because they wont be messed with. But if that really becomes a problem, you can send someone to take care of it on a later shift without disrupting any potential chemistry or flow on the skilled line. Last night against Boston, the Flyers were able to roll three dangerous scoring lines. With the departure of Upshall, they can no longer do that, and they pick up a player who will be essentially useless come playoff time.

The last thing the Philadelphia Flyers need is another agitator or enforcer. This is the most penalized team in the National Hockey League, and that's something that coach John Stevens has tried to curb all season. Adding the most penalized player in the league regresses that substantially. Holmgren said that the Flyers will try to reign in Carcillo, but how well did that work with Steve Downie? How well has that worked with Sean Avery? Speaking of Avery, Forecaster calls Carcillo "potentially the next Sean Avery."

Fan favorite or not, this deal is a blunder.