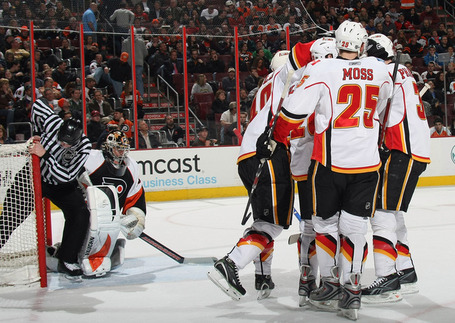 That was a good old fashioned butt-whoopin' there, that's what that was. I don't have an answer honestly. It was just an awful effort by our hockey team, right through our lineup. ... We were awful tonight. We got outplayed, looked like men against boys.

I don't know how much I can type here that would put this game into more perspective than those words from the head coach. It was just a pathetic, disappointing effort by the Flyers tonight, and coming off of such an inspiring win Tuesday in Boston, it's just that much worse.

The story on Tuesday, besides the Flyers victory, was the health of the lineup. For the first time in months, the Flyers had a completely healthy roster. That didn't last all that long did it?

Nope. In the second period, Danny Briere left with a tweak to his groin -- the same groin he's nursed all season long to this point. Paul Holmgren said after the game that the injury is in the same area and that there was a "bubble of blood" found. There is no news on how long Danny will be out, and there will likely be no news until tomorrow at practice.

Did one good thing happen tonight? Not a single thing. Do we know why? No.

Let's just move on then. Beat Nashville on Saturday.

Also of note tonight, Scottie Upshall scored a goal and was named first star of the game as the Coyotes beat Boston 2-1. Not sure if that's because Scottie owns the Bruins or if he wanted to prove something in his first game, but either way, good for him.