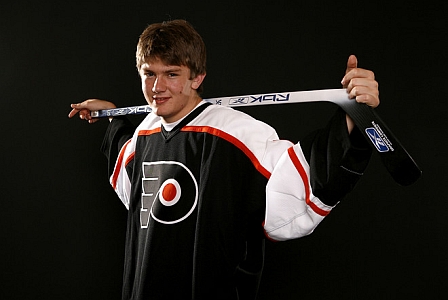 When his University of New Hampshire Wildcats fell to Boston University in the second round of the NCAA tournament on Saturday, Flyers prospect James van Riemsdyk had a decision to make. He could stay for his junior season at UNH, where he has been their best player over the last few seasons and has convincingly been one of the best players in nation at the Division 1 level, or he could sign with the Flyers.

There was no doubt in anybody's mind that the Philadelphia front office wanted JVR to turn pro. The consensus was that any more time in college would hinder his development and that he needed to move up in order to grow as a player.

There was a report in the Inquirer yesterday that van Riemsdyk had not yet made up his mind. Paul Holmgren said he was doing some "soul-searching." Apparantly, that search is over, as the Flyers announced today that JVR has signed an entry-level contract with the club.

"Obviously, this is a thrill of a lifetime. This is a day I have been dreaming about ever since I got drafted by the Flyers. Just to have this opportunity is something I am really grateful for. I thought the sooner I made this decision the better it would be for all parties involved.  Since I've decided to leave school, I've told the UNH coaching staff and everyone else early on so they will have more time to fill my spot there. I just thought signing at this point would help me get my feet wet a little bit in the professional game and start working on some things that I want to improve upon. Obviously, this is a huge jump in level of play. I know I am going to have to work hard and basically that is what I am expecting. I am going to work hard and learn a lot from this experience."

It's a multi-year contract, likely three years in length, as stipulated in the CBA. Entry-level deals can, at maximum, be worth $925k. The deal begins starting next season, 2009/10. In addition, he has signed an amateur tryout contract with the Phantoms for the remainder of the current season. He will not be eligible to join the Flyers until next season.

Riemer will report to the Phantoms and will be available for tonight's game at the Spectrum against the Albany River Rats at 7 PM. He'll be wearing number 22. I will be attending the game and I'll be sure to have pictures and, of course, a first hand account of JVR's first professional hockey game.