Phantoms swept out of Philly after 13 seasons

Share All sharing options for: Phantoms swept out of Philly after 13 seasons 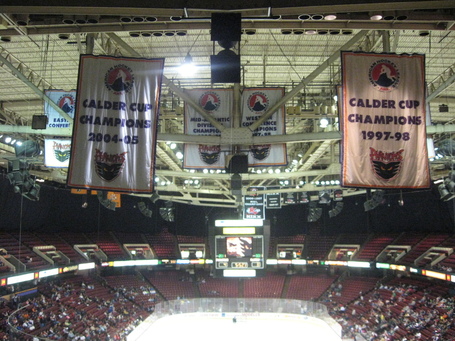 The Phantoms won two Calder Cups in their 13 seasons in Philadelphia.

After 13 seasons, 10 playoff appearances, and two Calder Cup championships, the Philadelphia Phantoms are leaving town without the bang they so often made throughout their tenure at the Spectrum. They were swept in their final playoff series as a member of the Philadelphia sports landscape, falling 1-0 against in-state rival Hershey in Game 4 of the AHL's East Division Semifinals on Friday night.

Given their dramatic finish to the regular season, it wasn't farfetched to believe that the Phantoms had a chance to upset the top-seeded Bears. They went 7-1-1 in their final nine games to clinch the fourth and final playoff spot, but once the postseason came, the offense went cold. The Phantoms were outscored in the four-game series by a total of 14-6, and a major reason for that was their inability to score on the power play.

During the regular season against Hershey, Philadelphia was clicking at over 25 percent with the extra skater. But in the playoffs, they couldn't capitalize even once in 21 chances. A major reason for that could be that they are missing Jared Ross, a major contributor on their power play unit. I'm sure he doesn't mind playing in the Stanley Cup Playoffs with the Flyers, but the Phantoms definitely could have used him.

Instead, they'll head home -- most of them to summer jobs -- to wonder about where they'll be playing in a few short months. Given the amount of turnover in the AHL, some will never see the Flyers organization again. A very select few could stay in Philadelphia with the big club. Most, however, will be off to the teams' new home, considering the team is still the Flyers AHL affiliate despite the fact that they are no longer owned by the same company. The organization has retained all control of hockey operations, regardless of where the team ends up.

The new owners of the team, Brooks Group, bought them from Comcast-Spectacor in early February. They have been shopping around various locations to move the franchise since that purchase, and while they seem very keen on the idea of the Phantoms landing in the Lehigh Valley, that situation is on hold until an arena is built in that region.

For the next few seasons, it appears as though the Phantoms will call Glens Falls,  a small town in the Adirondack Mountains of Upstate New York, home. The Brooks Group signed a lease with the Glens Falls Civic Center on Wednesday to bring hockey back to the town after a three year absence. The Adirondack Frostbite of the United Hockey League played there before ceasing operations in 2006, and before that the Adirondack Red Wings played 21 seasons as an AHL franchise before leaving in 1999.

That deal, however, is contingent on the franchise selling 2,500 season ticket deposits within the next month. In the past week, they have sold 1,200. A website has been set up to help with selling ticket deposits at shopphantomshockey.com. If that goal is not met, the owners will look at other options, although it's not known exactly what those options are.

If the goal is met, the Adirondack Phantoms will play at least three seasons in Glens Falls. The lease holds an option for a fourth and a fifth year, but given the teams' very public interest in the Lehigh Valley as a final destination and the failed history of professional hockey in Glens Falls, it's hard to imagine the Phantoms staying there long term.

Regardless of where they end up, though, it's hard to imagine they'll be as successful as they were in their 13 seasons of entertaining, affordable hockey at the Spectrum.

Philadelphia will miss you, Phantoms.