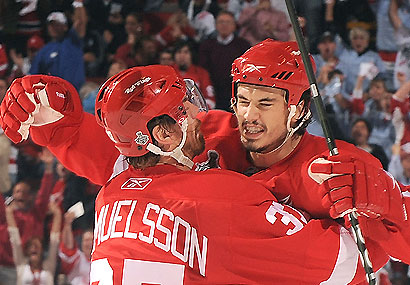 The Red Wings go up 2-0 on Penguins with collective team effort as series shifts to Pittsburgh.

Alright Flyers fans, the Stanley Cup Finals are two games deep with Detroit taking care of home ice advantage, up 2-0 heading to Pittsburgh for Games 3 and 4. So far, the Red Wings have put on hockey clinic. Osgood has been spectacular making the big saves when the Red Wings have needed it. Hank Zetterberg has done perfectly what we all hoped Mike Richards would do in shutting down Crosby. Crosby has no points, Malkin has been absent and Marc-Andre Fleury has let in some soft goals. He has not played anything like he did against the Flyers (further showing how badly he stole that series).

As a Flyers fan I am absolutely rooting for Detroit to repeat as Champion. I am hoping the Red Wings will sweep and if they continue playing the way that have (without Pavel Datsuyk I might add) its not a stretch. Anyone else feel the same?

So, what does everyone here think? Have you all been watching the Finals? I know in Travis' last post there was a little discussion but I would like to know what everyone is thinking (plus I check this everyday hoping to have a new topic to discuss but it has been pretty dry of late). As I watch these games I compare how I think the Flyers would be doing or what they need to do to reach this ultimate level which makes for an interesting perspective I think.

Some things I have been thinking about:

So far it has been a good series despite the redundancy of both teams. I am interested to see, as Flyers fans, your feelings about first two games. I have gone over and invaded Winging It In Motown and kept tabs on PensBurgh throughout Game 1 and 2 but it is just not the same as chatting with my friends here at Broad Street.

Let me know what you are thinking and your analyses of the series so far and if nothing else at least it gives us something to talk about.