Hello internetland, this is Ben, the internet sensation also known as Salmon, coming to you for the first time at Broad Street Hockey.  I'm really looking forward to being part of the team here, and am extremely grateful to have been tapped for this position. This is an amazing platform that I'm really excited to have the chance to share with Travis and Geoff (and eventually Dan), and hopefully I can help make it even better.

If you have spun your way around the Flyers blogosphere, you have probably at some point encountered The Flyer Frequent, for which I had written for the better part of last season.  I hope to be able to continue much in the same way here, bringing the same occasionally smart and occasionally smartassed stuff that I've been doing while bringing to the world revelations such as The Hat and more of The Hat.  The Hat was probably my peak. 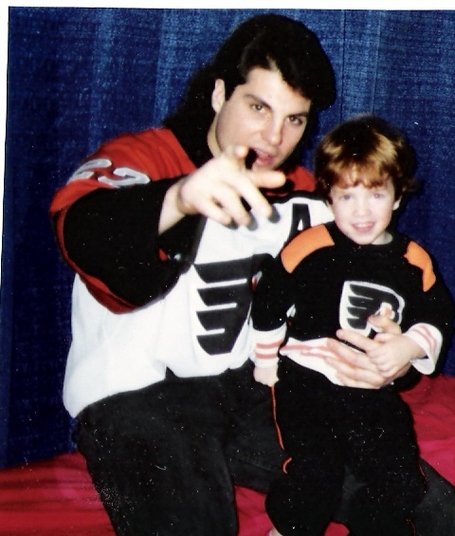 I've been a Flyers fan all my life, despite never having lived in the Philly area.  I was born and raised in Washington DC, but never came close to switching over to the Flyers fandom was passed down to me from my dad, who was in college in Philadelphia while the Flyers were winning their cups.  Growing up a Flyers fan in fairly hostile territory gave me a pretty unique perspective, but we still got weekend ticket packages to Flyers games for years, bypassing the nearby Caps to drive the two-and-a-half hours up I-95 to see the orange and the black, even in the dark eras of Dominic Roussel and Tommy Soderstrom.  But even when they were terrible, it was amazing.  How many other bloggers have pictures of themselves sitting on Rick Tocchet's lap? On second thought, don't answer that...

Especially when the Flyers and Caps were in the same division, I got to see a whole lot of the Flyers in Washington, with crowds of orange and black that were consistently bigger and louder than the home team's until the last couple years.  And over those years, I got to see the Flyers do some pretty cool things inside the Beltway.

From way back in the 1989 Patrick Division Semifinals...

...to 2008's Round 1 Game 7 OT. I'll never, ever, get tired of remembering being one of about thirty Flyers fans in the building when this beautiful event transpired:

That was probably a lot more than anybody needed to know about me.  Feel free to forget everything you've just read--the final exam won't be cumulative.

Big thanks again to Travis for having me here, and I hope Geoff and I can help make this place even bigger and better.