Summer Reading: The Good, The Bad, & The Ugly

Share All sharing options for: Summer Reading: The Good, The Bad, & The Ugly

A recent study showed that at least seventy percent of Flyers fans can be considered functionally literate. We here at Broad Street Hockey like to think that among our readers, the numbers are even higher.

It's with that in mind we bring you a seasonal look at the surprisingly robust canon of Flyers-related literature, for you to read while relaxing on the shore, plowing the fields in Amish Country, on the bus to Atlantic City, or perhaps to send to that special someone with a lot of time to read during their summer vacation at Holmesburg. 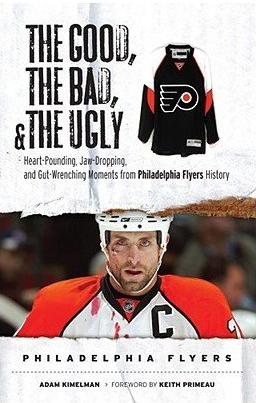 The first book we're going to take a look at in this series is 2008's The Good, The Bad, & The Ugly: Heart-Pounding, Jaw-Dropping, and Gut-Wrenching Moments from Philadelphia Flyers History, by Adam Kimelman.

After beginning with the founding of the team, Kimelman, an editor for NHL.com living in Langhorne, breaks up events in Flyers history into three sections.  As you may have guessed, the three sections are "The Good," "The Bad," and "The Ugly."

How much a Flyers fan will enjoy reading each section is indicated pretty well by the title. The "The Good" section details Stanley Cup wins, deep playoff runs, and beating the Soviets, among other highlights.  Reading about the greatest moments in Flyers history in incredible detail back to back will make you pronounce this your favorite book of all time before you've even finished.

But believe me, withhold your judgment.  The second half of the book is some rough stuff.

"The Bad" chronicles just about every heartbreaking loss in Flyers history in nauseating detail.  Fred Shero's departure, getting swept by Detroit, the 2006-07 season--it's not fun stuff.

If you thought that part was miserable, buckle up.  "The Ugly" goes into some even worse lowlights in Flyers history.  Career ending injuries, the death of Pelle Lindbergh, and crappy treatment of Roger Neilsson during his cancer.

By the end of the "Bad" and "Ugly" sections, which together are as long as you'll be wondering why the hell you ever liked the Flyers in the first place.

I recommend Flyers fans get this book, read the first 90 pages or so, then skip to the section on Eric Lindros, which does a much better job of balancing the fun and not-so-fun.  Then go back and read the "Good" section again and again.  Pretend the middle never happened.

You'll be much happier that way, believe me.