Flyers Rookie Game Recap: A Beating and a Win

Share All sharing options for: Flyers Rookie Game Recap: A Beating and a Win

The Flyers rookies beat the Capitals rookies today at the Virtua Flyers Skate Zone in Voorhees, New Jersey today.  They also won the game, 7-3.  James van Riemsdyk had 4 goals and an assist while Rob Bellamy, Tomas Sinisalo, and Joonas Lehtivuori rounded out the goal scorers.  The game was filled with penalties, including more than a handful of fights and a pair of five minute majors coupled with 10 minute misconducts.  The official recap can be found here.

Adam Morrison got the start for the Flyers and stopped 15 of 17 shots.  Jacob DeSerres took over a little more than 11 minutes into the second period and stopped 14 of 15.

Because I was only there for the Flyers - and since I did not know anybody by their number - I only took the time to worry about them.  For a Capitals recap, Japers' Rink has got it covered.

Period-by-period recap and analysis after the jump.

So, I was that guy in the stands with a legal pad, pen, and camera taking notes.  Of course, it was because I wanted to give all you folks my honest, in-depth opinion.  Or I'm a nerd.  Okay, here we go:

James van Riemsdyk showed why he was the #2 pick with a goal and an assist.  The assist came off a great pick-pocket, and a quick feed to Rob Bellamy.  While he didn't do much board work (Nodl took care of that), he did win a few battles on the boards.

Andreas Nodl had a relatively quiet first period where he did all of the little things right.  He threw his weight around, showed solid PK work, rarely lost a puck battle on the boards, and had a steal on the PK which directly led to a scoring chance the other way.

Jon Kalinski had a decent period, setting up in front of the net on the PP a couple of times and winning some puck battles along the boards.  By my count, he was 3/6 on draws, but one of those was a team loss, so if you think he's 4/6, 3/5, or legit 3/6, that's your call.

Marc-Andre Bourdon was very good on special teams.  He had a couple of takeaways, a poke check to break up a rush, and threw in a great outlet pass on the PP to spring a break.  Overall solid period.

Kevin Marshall showed good puck handling skills, both on the PP and the PK.  He threw his weight around, but most importantly knew where to be on the PK.  My notes say "Good off the puck work on the PK".

Eric Wellwood didn't do much this period, but he had a failed clear on the PK offset by a real nice play deep in the Capitals zone when he circled around the net and fed a wide open Flyer at the top of the crease.

Brennan Yadlowski made a nice play on the PK when he blocked a shot and took it away from the Caps, showed good board work a few times, and made a nice outlet pass to JVR through some Caps sticks on the PP; Joonas Lehtivuori had a failed clear offset by a pretty keep on the PP; Mike Thomas laid a big hit on a Cap, leading to a 5 minute charge.  When that penalty was over, he had another big hit, this time resulting in another 5 minute major, a 10 minute misconduct, and an injury for the Capitals' player.

Tyler Hostetter was very impressive on the defensive end, throwing his weight around and utilizing his body to force the Caps' forwards wide.  He also impressed by doing the little things right:  firing a wrist shot at the net, chest high from the side boards with traffic in front.  Got the deflection, but the save was made.

Adam Morrison rebounded from his poor showing in warmups with a solid effort.  He only gave up one goal this period, and it was on a rebound during a scrum in the crease.  He also showed poise on the PK with a nice save, followed by two consecutive saves on rebounds.

Matt Clackson got in a fight, was quickly dropped but bounced back up, arguably won the fight, but then got taken down.

JVR had a great period, scoring two goals.  The first goal was off of a great play by Jon Kalinski beating a guy to the outside, skating to the middle and maintaining control from the far boards to the crease, gathering the rebound as he moved back to the near dot, and firing another shot on goal.  Riemer jammed it home.  The second goal was a pretty backhand from the bottom of the circle with JVR facing the corner.  That got him the hat trick.  Overall, JVR lived in front of the net this period.

Andreas Nodl continued his impressive board work, cycling the puck very well on the PP.

Kevin Marshall showed his offensive skill this period, firing two very nice shots from the point.  The first directly led to Sinisalo's goal, and the second was on the rush where he fired low far corner leading to a juicy rebound in the slot that was narrowly cleared away.

Marc-Andre Bourdon had a quiet period, with the only note I have on him being a negative:  "Left man open behind him on the PK" leading to a scoring chance.

Zac Rinaldo had a very nice takeaway on the PK which led to a breakaway.  He was drug down, then stopped on the penalty shot.  Throughout the period he was throwing his weight around, which led to at least one turnover.

Tyler Hostetter had a great outlet pass across two lines, through three defenders; Tomas Sinisalo showed some agility when he deked at center ice, leaving a defender spinning on a dime; and Joonas Lehtivuori showed good pressure on the PK.

Adam Morrison gave up a PP goal to the short side.  Not excusable, but it was after a barrage of shots which took skill to stop.  Jacob DeSerres gave up 1 SH goal in the period, but it was on a terrible Flyers line change which led to a three man breakaway, with a trailing 4th man being backchecked.  So, almost a four on none.  It was pretty bad, leaving DeSerres no chance.  Afterwards, he made a real nice post to post save on the PK when a pass came from behind the net to the far dot.

Jon Kalinski skated off the ice with 2:20 left in the period and did not return.  I am still not aware of why.

Here, I spent most of the period taking pictures and loving the fights, so very few notes

JVR scored his fourth goal of the game, a very nice shorthanded breakaway 5-hole goal.  So much so, it deserved all those descriptors.

Kevin Marshall showed great vision and leadership this period.  Stepped up in the neutral zone to steal a pass and drew a penalty after he carried it into the offensive zone.  Later in the period, he immediately stepped up after a teammate got hit hard against the boards.  He was the first one to rough it up, leading to three fights after the whistle.

Matt Clackson.  He got in one of the fights mentioned above, but I'm not sure it was actually a fight.  He tried to get the Cap to fight him, but he wouldn't.  So Clackson took more than a few jabs at him, and he still wouldn't fight.  After a little while of this, Clackson decided he just wanted to pound the guy, and he did just that.  I wish I had video of this fight, but I was too much in awe.  It was almost painful to watch.  The Cap clearly didn't want to fight, but the linesmen were occupied with the other skirmishes, so Clackson proceeded to get over a dozen shots in at this guy's face.  Even the fetal position didn't help this guy, since Clackson just uppercut him while he was on the ice.  I'm reminded of that Neil Little fight, except there wasn't a ref "supervising" this fight, so Clackson just kept goin.

David Sloane looked confident and aggressive; Josh Beaulieu had a nice from-behind steal - in the offensive zone; Zac Rinaldo got his second breakaway off another steal, even used his body to get positioning, but couldn't finish; Mike Thomas was given a 10-minute misconduct after taking a few shots at a Capitals player - similar to, but not the same as what Clackson did - in the aforementioned scrap; Brennan Yadlowski looked completely lost on most of the shifts this period, turning a good game into a mediocre one; Joonas Lehtivuori had a very nice goal when he jumped up into the play and fired a shot from the top of the near circle over the goalie's far shoulder. 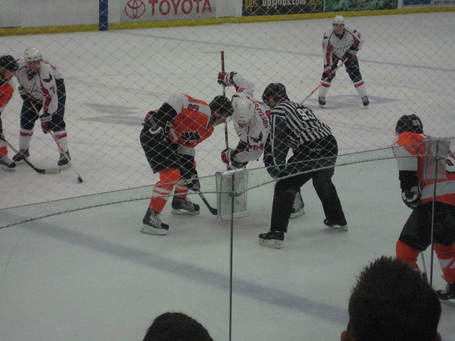 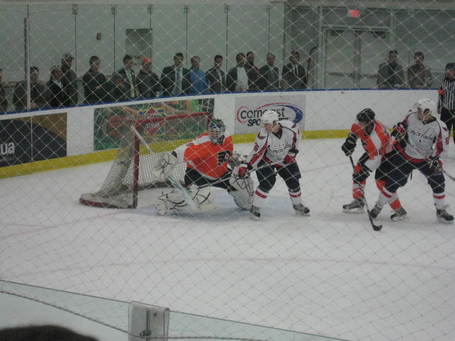 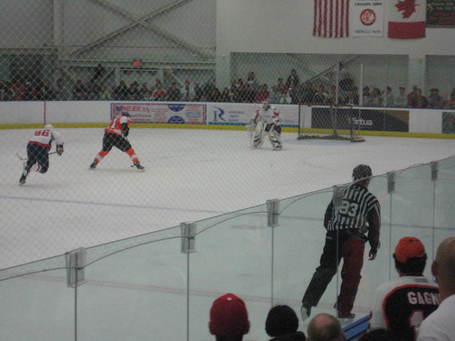 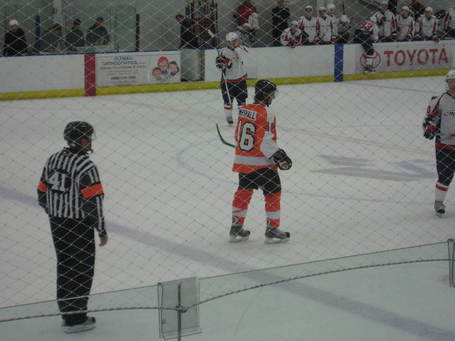 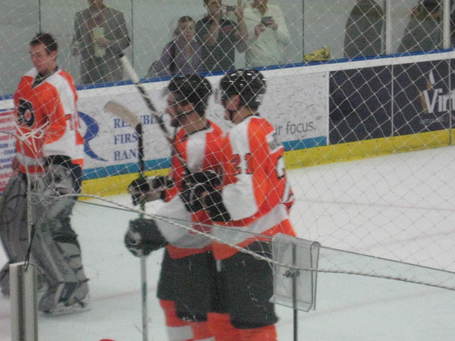 And now the Garrett Klotz fight.

Overall, JVR was obviously the star of the game.  Andreas Nodl appeared to be a ringer, since only David Sloane had previous NHL experience.  That could explain why he was so impressive.  Marshall looks to be a solid NHL player one day not far in the future.  My opinion, after today, is that Marshall is more ready than Bourdon, but it was just one game.  Also, the team obviously stocked up on "Flyer-types" - Clackson, Thomas, Klotz, and even Beaulieu - who were willing if not eager to rough it up.  [Eds. Note: Beaulieu even loudly taunted the Caps after one refused to fight Thomas, motioning while sarcastically whining "Just drop the gloves p***y!" It was hysterical.]

Two final things:  The team still doesn't have a true faceoff specialist, with Beaulieu (a LW) going 8 for 17, Labrecque 6 for 12, Kalinski 6 for 14, and Rinaldo 2 for 14.  Lastly, DeSerres was solid, but he didn't look good.  A couple defensive breakdowns led to some risky bounces that he somehow managed to keep out.  But you didn't get the feeling he was entirely prepared for the puck, and it trickled through the crease a couple of times.  Morrison looked solid, but he has a long way to go.  Specifically, he needs to control his rebounds a lot better.  But hey, the kid is 18.