Cheer up, Eagles fans: The Flyers are here

Share All sharing options for: Cheer up, Eagles fans: The Flyers are here 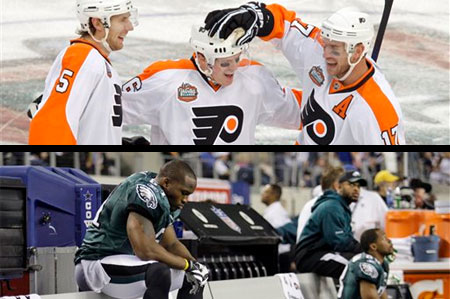 Hey, Eagles fans. We know it's been a tough ride over the last two weeks for you guys, what with the losing in the first round of the playoffs to your arch rival and everything. Trust us, we know the feeling.

It probably didn't get any better when you picked up the paper this morning to check out how the other teams in town are doing. The Sixers are downright pathetic, and besides that one night that Allen Iverson came back and those weird commercials with Marc Zumoff's head in the salad bar, you don't have to lie and say you knew they were still in town. Then there's those usually trusty Flyers, also toiling away in mediocrity outside of the playoff picture.

So you're sitting there right now on a Monday morning with no sporting direction to turn to. You're lost, and the thought of turning around and changing the channel to ESPN or CSN makes you sick to your stomach. You're probably thinking that you have a loooooong, agonizing 36 days until Phillies pitchers and catchers report to Clearwater.

We're here to tell you that's not the case.

After the jump, we'll catch you up on what you've missed so far this season and get you out of your football funk. It's hockey season.

What You've Missed: The Season To Date

Sure, the Flyers are a whopping 16 points behind the Devils and 10 behind Pittsburgh. Winning the division this season is a pipe dream, but we've been over that thought for a while now. The team played well for the first month and a half or so of the season thanks to contributions from rookies, vets, and newly minted Flyers alike. Solid goaltending from Ray Emery had proven a lot of people wrong as well.

But a West Coast road trip in mid-November started the snowball effect from hell. On November 18, they faced off against the Los Angeles Kings out at Staples Center. The Flyers pulled out a 3-2 win, but they looked ugly doing it as the Kings controlled most of the contest. It would be a sign of things to come over the next month and a half, but the results would be even worse. 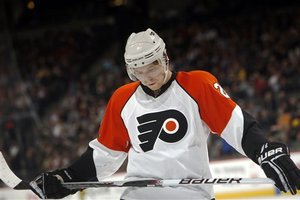 Continuing on the road trip, the Flyers would lose their next three in San Jose, Phoenix, and Colorado before coming back East to beat the New York Islanders on the night before Thanksgiving. In that Colorado game, though, a 5-4 Flyers loss, Ray Emery was pulled after looking extremely shaky. He hadn't looked good for some time and he hasn't played in a game since. It would come out in the first week of December that he'd be out six weeks with an abdominal injury.

Luckily for the Flyers, Brian Boucher was up to the task. Over the next 13 games, he went on to be the only reason that we had any hope at all for this Flyers team. He was brilliant despite a pathetic defense in front of him and an anemic offense down on the other end. One player can't win you hockey games and the Flyers would win just two of these 13 -- one against the Isles again and one against the Bruins.

In the middle of this stretch, John Stevens was fired. In came Peter Laviolette, a coach who would implement a higher-tempo offensive system than his predecessor. Stevens was seen by most as the scapegoat of an under performing team, but that's what happens in the NHL. You can't fire 20 something players, so out goes the coach.

It wasn't an immediate turn around for Laviolette. In fact, things got a lot worse before they got better. An 8-2 drubbing in his first game as coach at the hands of the Capitals came in the middle of that miserable 13 game stretch.

Let's try to draw a comparison here, Eagles fans. Do you remember when the Birds lost that game to the Oakland Raiders? There were so many questions and the team seemingly couldn't use any of their weapons properly. They came out the next week and whipped up on a pretty weak New York team, just like the Flyers did to the Isles a few times, but then quickly reverted to form in losing to Dallas and San Diego in consecutive weeks. These feelings of mid season misery have been felt by Flyers faithful as well, leaving us wondering where everything went wrong. 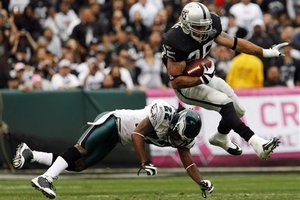 Just when we thought it couldn't get any worse, Boucher got hurt. With Emery already out and Johan Backlund the only goaltender in the coffers, things looks beyond bleak. Paul Holmgren went out and picked up goaltender Michael Leighton off of waivers. You might remember Leighton from such Flyers seasons as "2006-07, the year the music died," where he played six games for the orange and black and had terribly unattractive numbers. Another below average goaltender didn't really make us feel any better, but go figure, we're probably going to wind up opening a church on South Broad Street to worship the guy.

Leighton's first start came on December 23rd in Tampa, the start of a five game road trip. He made 31 saves in just the fourth Flyers win in 18 games and the Flyers entered the Christmas break on the right foot. With Boosh still out, Leighton had a chance to make a bit of a name for himself. The team squeaked out a win against basement-dwelling Carolina -- Leighton's former team -- in their next outing for their second straight. They had picked up more than they had ever expected from Leighton by now, but with Boucher still out, they still had to ride the young 'tender.

With a win over the Isles and a 6-0 drubbing of the Rangers to end the decade, Leighton and the Flyers were suddenly a red hot 4-0-0 heading into a Winter Classic matchup with the Bruins on New Year's Day. You probably caught some of that game if you weren't too busy with the Mummers or Penn State like a lot of other Philadelphians apparently were. Boosh was healthy that day but Laviolette decided to keep with the hot hand, opting to give Leighton the honor of starting the NHL's fourth ever outdoor regular season game. They lost in overtime, but you cant win them all, right?

A loss against Ottawa and three wins later, the Flyers are just a point out of the playoff picture. The offense is on fire, scoring 21 goals in their last four games and chasing the opposing goaltender in three of their last six games. Leighton has been great and Boucher is still riding the pine while Laviolette continues to stick with his suddenly brilliant goaltender. Emery is back with the team after a conditioning start with the Adirondack Phantoms -- yes, the Phantoms moved to upstate New York -- and he'll look to return to form.

Look closer at those standings. We may be out of a playoff spot by one point today, but we're just four points behind the fifth place Bruins. We've got games in hand over the teams currently in eighth, seventh, and sixth as well. The battle hasn't been won yet, but at least now we have a fighting chance. Things aren't as bleak as you thought, eh?

There are a lot of players on the Flyers you might not be familiar with, Eagles fans. Let's try our best to get you acclimated, shall we? 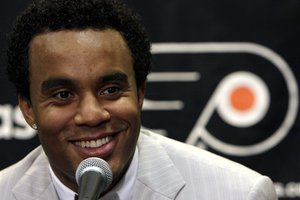 First off, there's Ray Emery. A bad boy who wore out his welcome in Ottawa a two years ago, Emery was banished to Russia to try to resurrect his career. After a season in the Kontinental Hockey League, Emery was brought in this off season by Paul Holmgren to solidify the Flyers goaltending. He was giving Emery a second chance at an NHL career. Does this sound familiar to a certain Eagles offseason signing, who was given a second chance at resurrecting his career after being banished from the league to think about the errors he had made? Hmm...

Chris Pronger is like the Brian Dawkins of the Flyers. He's an animal. He shuts people down. He's an emotional leader. He might even play a little dirty sometimes. No, he's not going to crawl out of the tunnel on all fours, but he's the guy you want on the ice in big situations. He's the Flyers defense. He was born to play in Philadelphia. You'll love Chris Pronger.

Donovan McNabb is the target of a lot of anger around this town, and possibly even more so than ever right now thanks to his atrocious showing the last two weeks. But over his career he's been an extremely effective player, and when the Eagles pull out a win, he's usually the main reason they were able to do so. Meet Jeff Carter. 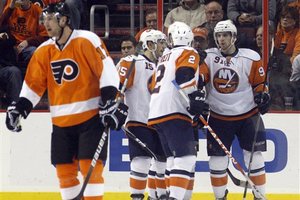 Like McNabb, Carter has been on the end of a lot of fan vitriol so far this season. He's been called lazy, an under achiever, a bum, and many fans have begged for him to be traded away. McNabb feels his pain, I'm sure. At the core of both these players is a ton of raw talent, and while many of the criticisms directed at Carter may be true, he's still practically a point per game player.

David Akers is probably the model of consistency. He's been on of the best place kickers in the NFL for years now, rarely ever missing a field goal. On the Flyers blueline, you'll find your Akers fix in Kimmo Timonen, the Finnish wonder of a defenseman. Like Akers, Timonen goes out and does his job every single night. He's one of the best to play the position for the Flyers in maybe even their history, is one of the most underrated players on the team, and you always know what you're going to get out of him.

The Eagles have a lot of young talent, and they were only able to pick up any kind of success this past season thanks to the youth showing up and learning on the job. They were led by the dazzling Desean Jackson, a second year pro who seems to amaze every time he touches the football. The Flyers have their own Jackson in Claude Giroux, an awe-inspiring sophomore forward with the vision and moves that have drawn him comparisons to Peter Forsberg. Everytime Claude touches the puck you know he's going to do something exciting.

There's also a rookie by the name of Jeremy Maclin on the Birds who has a ton of skill as well. Maclin might not be as exciting as Jackson but his numbers are still quite impressive. For a while before the Flyers decided to suck for over a month, James van Riemsdyk was getting Calder Trophy and USA Olympic consideration. Like Maclin, he entered the Draft after just two seasons of playing in college and has adapted to the professional game quite well. JVR isn't flashy like Giroux but he's still an integral part of this team as a rookie.

So, Eagles fans. The Flyers really aren't that different from your beloved Birds. They've had their struggles this season but they seem to have worked through them and are on their way to bigger and better things. We can only hope that things end a little better than they did for the Eagles, but we don't have to think about football for a while now.

It's hockey season and the Flyers are here to cheer you up. Jump on the wagon, won't you?